The guard is charged with culpable homicide and the case was on Wednesday postponed to 9 June 2021. 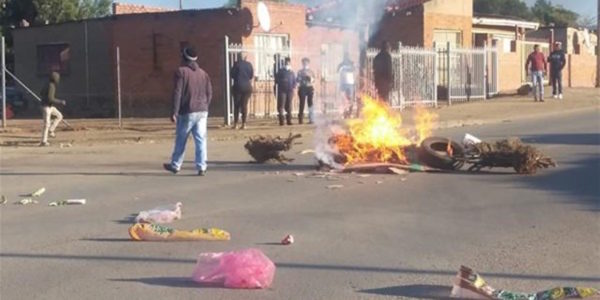 Scenes at the Mangaung protests on 18 May 2021. Picture: OFM

A security guard accused of shooting dead 14-year-old Jevano Siegel during protests in Mangaung on Monday has been granted bail of R1,000.

The guard is charged with culpable homicide and the case was on Wednesday postponed to 9 June 2021.

In another case relating to the protests, the cases of 35 community members accused of public violence, robbery and arson have been postponed to Friday 21st for formal a bail application. All 35 remain in custody.

Intense protest action has seen community members in Mangaung and Botshabelo areas demonstrate for change, accusing the Mangaung municipality of being dysfunctional.

A police Nyala was set alight, with protesters donning police hard hats while dancing around the flames.

Provincial offices of the Department of Employment and Labour, as well as the Botshabelo and Zastron Labour Centres, have since been shut due to the unrest.

Protesting residents are calling for the disbandment of the metro council and for better service delivery, among other issues.

In a lengthy statement, Mangaung municipality slammed the violent protests, saying they resulted in some services either closed or partially rendered.

It also criticised the protesting groups for hijacking legitimate community concerns for their own interests.

“It would appear that there are some among these groups who claim to represent residents of Mangaung but only hijacking legitimate community concerns for their own interests, means and ends,” reads the statement.

Eswatini nurses shot during protests: union
1 week ago
1 week ago

Eswatini nurses shot during protests: union
1 week ago
1 week ago