Taxi operators opened cases of malicious damage to property after their vehicles were torched. 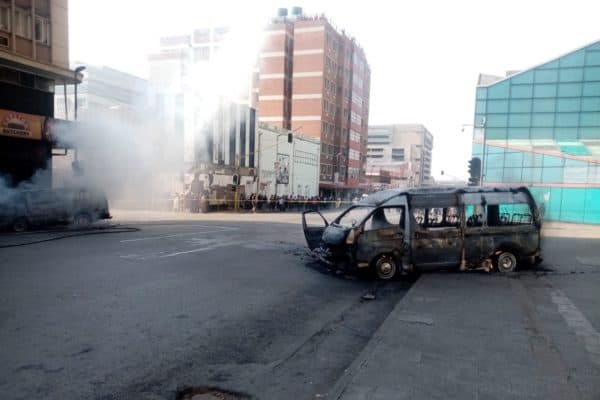 Four taxis were torched and six others damaged in the Johannesburg CBD on Saturday. Photo: Twitter/JMPD

One of the taxi associations involved in the violence that led to four taxis being torched and six others damaged in the Johannesburg CBD on Saturday is blaming the government for the conflict.

The violence on Saturday was due to the rivalry between WATA and the Nancefield Dube West Association (Nanduwe).

Miya said Nanduwe drivers were loading their taxis at a WATA rank on Saturday. He also claimed that three WATA drivers were assaulted as well. Miya confirmed that the four taxis were torched in retaliation.

He also confirmed that two Nanduwe taxis were burned in Soweto on Saturday.

Miya accused Gauteng Transport MEC Jacob Mamabolo of having a “soft spot” for Nanduwe. “It’s the first time I’ve seen the MEC angry like this. Our taxis have been vandalised many times and [when] we report it to the MEC he is never angry like this,” said Miya.

“The taxi people know how to solve their own problems, without government,” Miya added.

According to the police, some taxi operators have opened cases of malicious damage to property.

Miya said that WATA has suspended its operations since Saturday morning as it fears for the lives of its drivers and passengers.

Mamabolo will be meeting WATA and Nanduwe on Sunday.

Two taxis in Soweto were also torched. It’s believed the clashes were sparked by rivalry over routes.

In a statement on Saturday, Mamabolo condemned the taxi violence in Johannesburg.

“We condemn these acts of violence between WATA and Nanduwe as they undermine the work that our department together with the taxi industry have been doing to stabilise the province. We call on law enforcement to swiftly deal with those behind the violence,” said Mamabolo.

“We call on the taxi industry to refrain from violence. Their leadership should take responsibility and end this.”

The taxi violence on Saturday follows another incident in Gqeberha on Wednesday.

Eight taxis and two civilian cars were set alight after a confrontation between a taxi driver and Somali businessman who was driving an Audi.

Taxi violence: Gauteng urged not to give same routes to different associations
1 month ago
1 month ago

Taxi violence: Gauteng urged not to give same routes to different associations
1 month ago
1 month ago