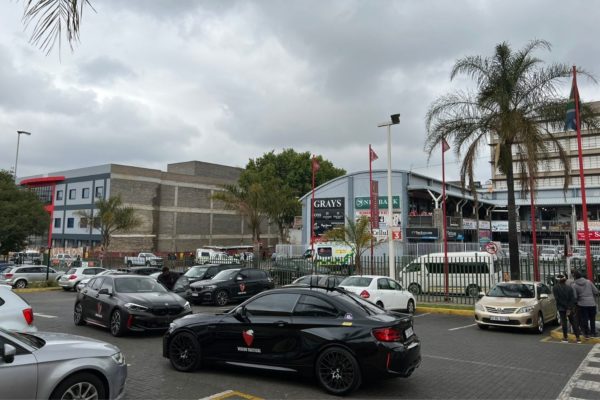 Two security guards and a construction worker were injured in a shootout at the Oriental Plaza on Tuesday. Photo: Twitter/@visiontactical

Two security guards and a construction worker were injured during a shootout at the Oriental Plaza in Johannesburg on Tuesday.

The chaotic scenes were caught on camera and released by Yusuf Abramjee. He claimed the gunmen were robbing a jewellery store at the mall in Fordsburg.

Security guards from Vision Tactical responded to a robbery. The security company said a guard and construction worker were injured during the shootout.

“Twelve suspects believed to carrying automatic rifles fled the mall. We ask that the guard and construction worker are kept in your prayers, and are happy to report that they are both in a stable condition,” Vision Tactical said in a statement.

ER24 also attended to the scene and claimed another security guard was injured during the gunfight and taken to a nearby clinic.

“The three patients were treated for their injuries and were provided with pain-relief medication before they were transported to nearby hospitals for further care.”

Vision Tactical added that the mall was safe and shoppers could return – but cautioned that they need to avoid the crime scene, which was cordoned off.

On Sunday, an armed robbery took place at a jewellery store in Menlyn Mall. A security guard and civilian were injured during that shootout.

A video shared on social media shows how robbers bypassed the mall’s spike barrier at the parking area’s boom using a metal ramp that they left behind.