The word ‘fail’ could be too strong for students – Nzimande

Blade Nzimande said failure did not mean that one is 'a failure as a person', although the youth should be encouraged to work hard and make use of opportunities offered by government. 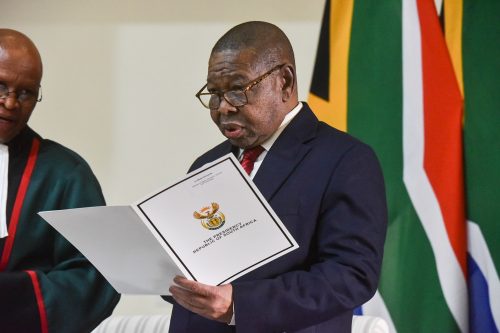 Minister of Higher education, Blade Nzimande during the swearing in of the new Presidential Cabinet at the Presidential Guesthouse in Pretoria, 30 May 2019. Picture: Jacques Nelles

Higher Education and Science and Technology Minister Blade Nzimande said he was engaging with the Department of Basic Education regarding the word “fail” when describing the performance of students who don’t do well.

“Maybe the word ‘fail’ may be too strong. I have spoken to the Department of Basic Education about that [and] think it’s an issue for us educationalists, to maybe engage educational psychologists to actually deal with this matter so we don’t discourage our young people, as much as we possibly can,” the minister said on Thursday.

Nzimande spoke at a media briefing in Pretoria on Thursday where he gave an update on the availability of spaces and opportunities at public universities and TVET colleges.

He said failure did not mean that one is “a failure as a person”, although the youth should be encouraged to work hard and make use of opportunities offered by government.

“It’s important that we do not get students who do not make it, to get discouraged. That’s why we also encourage them to explore other opportunities. We believe, ideally, there is no human being [who] you can say is a failure,” the minister said.

According to an article by TimesLive, Professor Kobus Maree from the department of educational psychology at the University of Pretoria says the word “fail” had no place in current society.

The professor told the publication that the term “insufficient achievement” was more appropriate to use.

Nzimande said he agreed with the notion, adding that the word “fail” gave the wrong impression. He said other factors could be involved and it’s not necessarily that students who are falling behind, are not smart.

“A student may fail because there was a tragedy. Some students didn’t have a Maths teacher or an English teacher for one reason or the other.”

He said this was one of the reasons students were encouraged to explore other opportunities within the education sector.

Nzimande said he was in consultation with various stakeholders within the education sector, including student bodies, political parties, labour federations, Salga and Contralesa, ahead of the resumption of the academic year.