Saftu said Nzimande should be championing free higher education instead of undermining the efforts of students to free quality education. 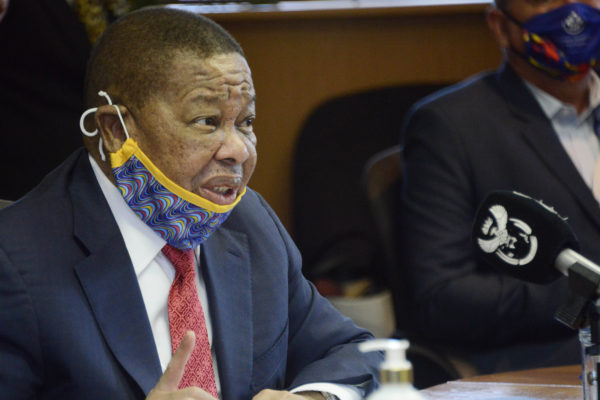 Minister of Higher Education, Science and Innovation Dr Blade Nzimande visits Tshwane University of Technology to assess state of readiness for the phased returning of students to campus on June 09, 2020 in Tshwane, South Africa. (Picture by Gallo Images/Frennie Shivambu)

The Economic Freedom Fighters (EFF) and the SA Federation of Trade Unions (Saftu) have called on Higher Education and Training Minister Blade Nzimande to resign after he compared the student protests to a TV soap opera.

On Tuesday, Nzimande showed his concern over the disruptions at universities where students called for historic debts to be scrapped and the government to deliver on the promise of free education.

“Every year, it’s like a soapie now, The Bold and the Beautiful. Every beginning of the year there is instability,” said Nzimande.

He made these remarks after students at a number of universities took to the streets in response to the call by the SA Students Congress (Sasco) to shutdown all institutions of higher learning and accused the government of failing to meet their demands, including free education.

Saftu spokesperson Trevor Shaku said the statement was “reckless, insensitive and insulting” to the efforts made by the students and that Nzimande should be fighting for free education instead of mocking those who are trying to hold government to account.

In a statement, the EFF said instead of acknowledging that the student protests happen on an annual basis because of the “failure of national government to deliver free education and alleviate the crisis confronting the sector, Nzimande has resorted to mocking students, implicitly avoiding taking responsibility for his dismal incapacity as a minister”.

The party said Nzimande’s comments were “callous, stupid and insensitive” and asked why he was still occupying his ministerial position when he has evidently failed in that duty.

“In an idiotic attempt to either be funny, or exhibit some form of low-life intellect, Nzimande compared the
valid demands of students, year in year out, for free education to a television drama, invalidating the pain and struggles of a generation of young people,” the EFF said.

“Nzimande’s removal is long overdue as he continues not to account to parliament, repeatedly giving sermons and then retreating to unidentifiable engagements. This has revealed that he has no regard for the oversight
role of parliament as he continues to schedule mythical engagements when he is supposed to account before the committee.”

Saftu said Nzimande should be championing free higher education instead of undermining the efforts of students to free quality education.

Sasco’s deputy president, Buyile Matiwane, said they supported the call for Nzimande to step down.