Some universities extended their registration by two weeks while talks for a further extension for all unregistered students were under way. 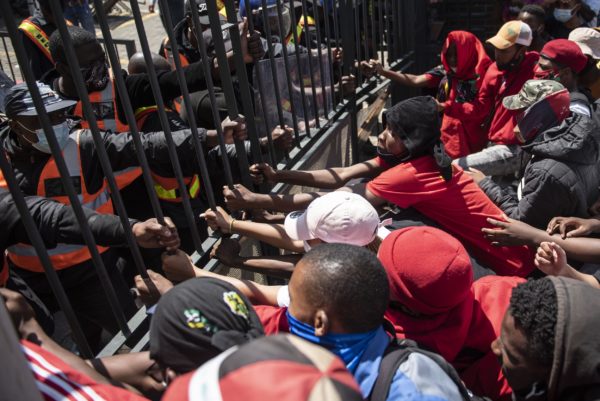 Wits University students clash with security on 9 March 2021, during a protest, demanding all academically deserving students be allowed to register, including those with historical debt. Picture: Michel Bega

The South African Union of Students (SAUS) has announced an end to the nationwide student protests following a meeting with the Minister of Higher Education, Science and Innovation, Blade Nzimande.

In a statement, SAUS said it also met with the Public Protector, the South African Human Rights Commission (SAHRC) and the parliamentary portfolio committee on higher education and training to discuss the 15 demands tabled by students.

This is after Nzimande told the portfolio committee that NSFAS had a funding shortfall of R5 billion.

The minister had announced the government had budgeted R42.1 billion this year for NSFAS to fund 700,000 students.

On the student protests, which began on 15 March over “financial exclusion”, SAUS said 643,000 students with historic debt managed to register online in the past two weeks.

The student body said some universities had extended their registration period by two weeks and discussions were under way for a further extension to accommodate all unregistered students.

“All NSFAS funded students are now being allowed to register without having to pay the minimum initial payment (MIP) or registration fees,” it said.

“The problem of the R13 billion student debt has been successfully placed on the national agenda again and a process has been established to categorise the debt properly so that proposals for a solution can now be tabled in parliament.

“Laptops from NSFAS will be distributed in the next three weeks. SAUS will be part of the distribution team to ensure all deserving students receive their devices on time.”

SAUS further said 19 of the 26 universities have started to allow students back on campuses and to residences. The remaining seven institutions are expected to follow in coming weeks.

The student body added that 22 out of the 26 universities had agreed to suspend academic exclusions for the 2020 cohort of affected students.

Meanwhile, SAUS was able to raise a R5 million donation from one SETA to fund needy students who are studying built environment and critical skills qualifications.