Asked about her results, Kelby Balker said: 'The 1% doesn't bother me - I am so happy with my other results and so they make up for the 79[%]!' 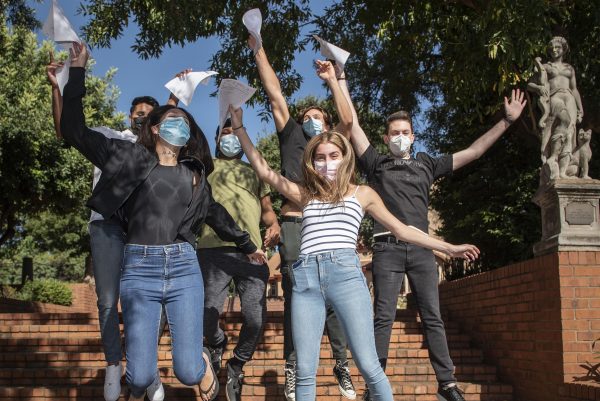 Kelby Barker from Diocesan School for Girls (DSG) in Makhanda was one of 12,024 full-time candidates who wrote the National Senior Certificate through the Independent Examinations Board (IEB) in 2020.

She was one of three pupils from the prestigious Makhanda boarding school who got six distinctions each.

Asked about her results, Balker said: “The 1% doesn’t bother me – I am so happy with my other results and so they make up for the 79[%]!”

Sharing her plans for the future, she added: “I am going to be studying a BSc in genetics, physiology and psychology at the University of Pretoria this year. I think the key to doing well in matric is believing in yourself and your capabilities, no matter how difficult it gets.”

Of all the subject symbols achieved, 35% were distinctions and 37% were B symbols.

DSG’s brother school, St Andrews College, also produced splendid results, achieving a 100% pass rate with all but one of the 75 boys achieving a Bachelor’s pass.

In a statement, the college said considering the Covid-19 pandemic gripping the world, the class must be congratulated for navigating unchartered territory during their final academic year.

Barker is joined by Leah Micklewright and Duki Sonuga who also achieved six distinctions each.

Mzayidume and Yolisa Ngcola were listed in the Top 1% of candidates in the country in isiXhosa First Additional Language.

Despite the challenges that Covid-19 presented, the group demonstrated resilience and ended the year with much reason to celebrate, DSG said in a statement.

Leading by example, the school’s head boy, Jonathan Shamwana from Lusaka in Zambia, was the Dux scholar with an 89% aggregate.

He was followed by Jordan van der Meulen from Adelaide in the Eastern Cape, with an aggregate of 88%, while Michael Stavridis from Port Alfred achieved an 86% aggregate.

James Houze from Johannesburg and Mpanju Kabushenga from Kampala in Uganda both achieved four distinctions.

Talia Aliber and Tyler Bovey, joint Dux scholars for 2020, garnered 15 distinctions between the two of them for Kingswood College.

Aliber, who hails from Alice in the Eastern Cape, achieved an overall average of 91% after getting eight distinctions. Not only did she place herself in the top 1% for English Home Language nationally, she was also ranked in the top 5% of pupils in five subjects nationally.

Her advice to the class of 2021: “There will be days when all you want to do is cry and give up. Cry by all means, but just don’t give up. Even if all you do is get up and study a quarter of what you’d intended, it’s not nothing.

“Do the best that you can with where you’re at, and know that that is what counts. You aren’t defined by your grades. Who you are is defined by what you’re willing to struggle for.”