No red tide taking over in Limpopo

The ANC in Limpopo had apologised for poor service delivery and the latest results showed beyond any doubt that the apology had been accepted. 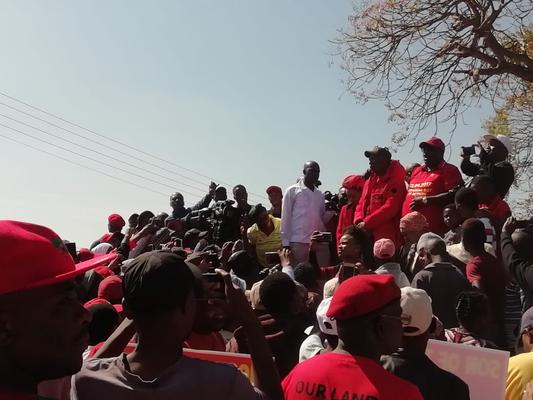 EFF leader Julius Malema addressing his supporters outside the Mponegele Primary School in Seshego, Limpopo, where he cast his vote earlier on Wednesday morning. Malema thanked his supporters for messages of condolences after his grandmother's passing. He said they must be vigilant at voting stations until the last vote is counted Photo: African News Agency (ANA)

If the preliminary Electoral Commission of SA (IEC) poll results are anything to go by, the Economic Freedom Fighters’ (EFF) dream of governing Limpopo will remain a dream for now.

The tally of votes at the time of going to print showed that the governing ANC had left the red berets in the dust by a massive margin in the home province of EFF leader, Julius Malema.

The EFF boasted on Wednesday that its dream of leading in North West, Gauteng and Limpopo was close at hand.

“We will accept the outcome of the results. Even if it is two votes, we will welcome them with both hands.

“That will be the true reflection of what our people feel about the EFF on the ground. It will mean we should stand up and dust ourselves off and soldier on,” Malema told a crowd in Seshego after voting.

However, he said the race was still on until the last vote was counted.

He added that he believed the party’s performance would be better than in the last election in 2014.

EFF provincial leader Jossey Buthane said indications on the ground were that the people of Seshego and Limpopo in general loved the EFF, hence the large turnout at various polling stations.

ANC Limpopo deputy provincial secretary Basikopo Makamu said yesterday: “We are humbled by the gesture of our electorate. They proved beyond any shadow of doubt that the ANC can indeed be separated from the boys.”

Makamu said the ANC in Limpopo had apologised for poor service delivery in some parts of the province and the latest results showed beyond any doubt that the apology had been accepted.

“We hope to do well in this province and ensure that all people get services from our government promptly as required. But we will wait until the last whistle is blown before we jump,” he said.

Masilo Maloko, an ANC pundit in Tzaneen, said he had organised a plethora of gigs and braais for those who worked on the ANC campaigns.