Hitting the campaign trail in his capacity as president of the ANC, Cyril Ramaphosa charmed crowds by poking fun at himself. 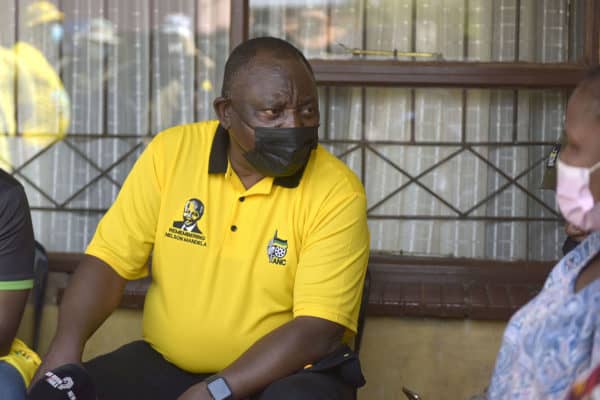 President Cyril Ramaphosa hit the campaign trail in his capacity as president of the ruling party on Sunday and charmed crowds by poking fun at himself.

He began by addressing the elderly crowd in Ekurhuleni, telling them not to worry about him getting tired as he works out often in an effort to remain fit.

“I want to applaud you, bo gogo for what you are doing, For yourselves and your grandchildren. To be fit and eat properly is a good thing.”

Ramaphosa thanked the crowd for coming out to listen to him before checking who had their masks on and who had been vaccinated by asking them to raise their hands.

“You all laugh at me whenever I say ‘my fellow South Africans.’ The other time, you said ‘hey! That guy can’t wear his mask properly,” began Ramaphosa before extolling the virtues of wearing one’s mask properly, getting vaccinated and adhering to other mandated Covid safety protocols.

He then went on to explain the importance of getting vaccinated to the crowds that had come out to hear him speak over the loud speakers.

Ramaphosa urged the crowd to listen to Gauteng Provincial Chair David Makhura (who is also the province’s Premier) every time he spoke publicly and reminded the crowd to make their way to the polls on 1 November 2021.

This, Ramaphosa said, was because Makhura was actually at the forefront of most of the ANC’s campaign efforts within the province.

They made sure to make their way to Ward 3, popularly known as Winnie Mandela Park on the late Mam’Winnie Madikizela Mandela’s birthday.

READ NEXT: DA aims to ‘get things done’ as it launches election manifesto

Hostage case: 11 supposed military vets due in court for bail hearing
41 mins ago
41 mins ago

Hostage case: 11 supposed military vets due in court for bail hearing
41 mins ago
41 mins ago