WATCH: Malema pleases the crowd by dancing with Fifi Cooper and co

The EFF are known for keeping close relationships with many musicians and artists, and it seems festive for them ahead of elections. 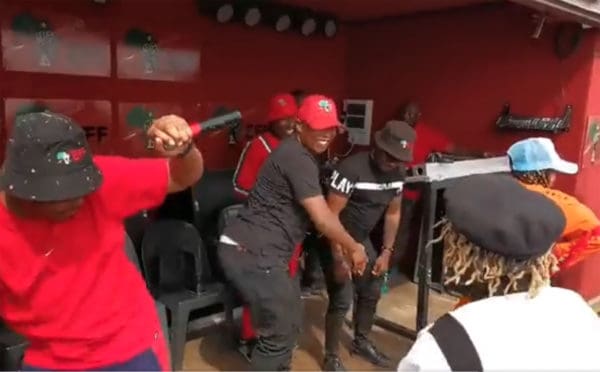 Hot on the campaign trail, the EFF spent Saturday in various locations in the Free State, including Maluti-A-Phofung and Dihlabeng.

What stood out on stage though was the presence of performers Uncle Vinny, Cornet Mamabolo, Tshedi Mholo, Fifi Cooper and Ntando Duma, who managed to convince EFF leader Julius Malema to show them some of his dance moves.

It seemed to have the approval of not just the performers but the crowd too.

Fifi Cooper, for one, has credited the EFF with saving her music career and has spent the weekend wearing EFF branding.

Malema reached out to Fifi, often referred to as the first lady of Motswako, in 2017 after her former record label‚ Ambitiouz Entertainment‚ served her with a court interdict preventing her from performing songs she had recorded before leaving the label.

After the EFF filed legal papers on her behalf, the label settled out of court. She has also expressed gratitude to the party in the past for booking her for events when no one else had wanted to due to her legal problems.