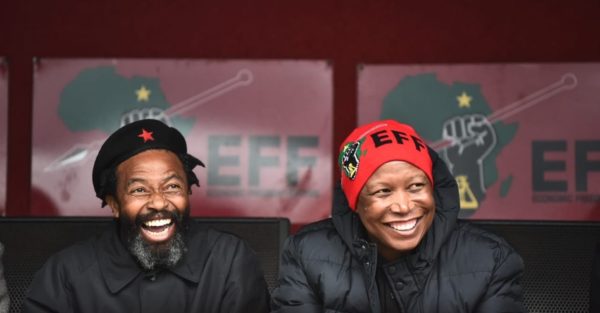 AbaThembu King Buyelekhaya Dalindyebo has called on his subjects to vote for the Economic Freedom Fighters (EFF) during this year’s local government elections in order to “teach the ANC a lesson”.

Dalindyebo on Sunday joined EFF leader Julius Malema at the party’s campaign rally in Mthatha, where he endorsed the Red Berets as his preferred party ahead of the 1 November polls.

The king, who is no stranger to controversy, previously called on the AbaThembu people to vote for the DA before the 2016 municipal elections after falling out with the governing ANC.

This year, Dalindyebo appears to be singing a different tune despite saying his role is apolitical as a traditional leader.

“He [Malema] is not yet in leadership [government], but he is doing what the ruling government should be doing and we say to him, may his party continue to grow.

“He has our full support. We urge all the Thembus to vote for the EFF to just teach the ANC a lesson and show them what they should be doing that they are not doing,” Dalindyebo said.

He was speaking to the media at his private residence in Nkululelweni, Mthatha, after meeting with Malema for a meeting.

He also said Malema promised him that he would gift him a brand new Mercedes-Benz ML SUV “fit for a king”.

The EFF said it was deeply humbled by Dalindyebo’s call for his subjects to vote for the party.

The party said it welcomed the king’s endorsement with the “greatest humility, mindful of its magnanimity and gravitas”.

“We welcome this call. Above all, we welcome the king’s confidence in the EFF, its mission and its leadership. We accept it as a blessing and a gift we shall forever cherish,” the EFF said in a statement.

“We vow that we shall never betray his confidence and faith in our movement. That we shall stop at nothing to fight for the dignity of the AbaThembu people, and all black people in general.

“We know that it is the king’s heart’s desire to see the land restored to his people, and all black people in general. It is his desire to see massive agricultural development in his kingdom and across all of rural South Africa.

“In the name of his hope and faith in us, we shall stop at nothing until his heart’s desire comes to pass, in his lifetime.”