Mbuyiseni Ndlozi, however, has wondered if the deputy president would manage to express himself quite as clearly when talking about the topic. 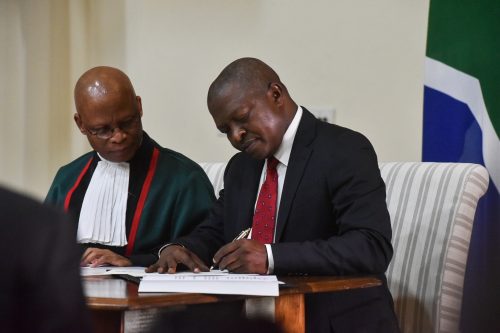 Deputy president David Mabuza during the swearing in of the new Presidential Cabinet at the Presidential Guesthouse in Pretoria, 30 May 2019. Picture: Jacques Nelles

Despite earlier this week appearing to have been mystified in parliament about exactly which industrial revolution South Africa is currently in, Deputy President David Mabuza has now published an erudite column on the subject in Business Day on Friday.

In the column, he appears piqued about people finding any humour in the topic, which may be a reference to the fact that he was roundly laughed at on Tuesday in parliament for his attempts to discuss the topic.

He wrote in his column that: “The frivolous manner in which the issue of industrial revolutions has been discussed in our society in recent times tends to trivialise the developmental challenges we face. It manifests as nothing more than an exercise in cheerful political camouflage.”

Mabuza found himself on the Twitter trends list on Tuesday afternoon for his unexpected reply to a parliamentary question from EFF MP Mbuyiseni Ndlozi, who asked him to speak about nanotechnology.

The deputy president struggled right off the bat, after Ndlozi, clearly intending to embarrass Mabuza show him up, asked him how “nanotechnology will affect medical diagnosis”.

Mabuza went on to explain his understanding of the fourth industrial revolution and how this would improve the way the country was doing business and being more competitive. He, however, at no point made an attempt to actually answer Ndlozi’s original question.

The DA’s chief whip, John Steenhuisen, suggested that Mabuza might need to “phone a friend”. Ndlozi then rose on a point of order and advised Mabuza to go and educate himself, particularly on nanotechnology.

Mabuza responded by once again talking about the first to third industrial revolutions, wondering if that was wrong.

House speaker Thandi Modise then came to the deputy president’s rescue by saying that questions should be limited to what Mabuza had come to parliament to speak about, and she acknowledged Ndlozi’s advice that Mabuza might need to go and “brush up” on some points.

Many on Twitter later provided helpful graphics to explain the history of humanity’s rise to becoming a technologically advanced species.

Mabuza appears to have taken Modise’s advice and wrote in his Friday column: “It is the goal of this leadership to demystify 4IR and ensure that there is deep understanding of its effect on the lives of ordinary people in our country.”

He appeared to lash out at Ndlozi at the end of the piece, though, arguing that, “In understanding the depth of our challenges and the complexities of 4IR we cannot wallow in despair. Bland classroom exercises of definitions and descriptions will not unleash our potential to leapfrog the current state of development and harness the changes that can shape a better future for SA and our continent.”

In Business Day’s comments section, many users seemed to express doubt about whether Mabuza was actually the column’s author.

Ryckard Blake said: “Yesterday in parliament [sic] Mabuza VP cuddin [sic] even spell 4IR, today he pontificates about this thing of which he has not the slightest understanding. Who does he think he’s fooling?”

Christiaan van der Wath was more generous though in response to Blake: “At least the VP then did the right thing – he got someone knowledgeable to write something meaningful about 4IR – then endorsed it.”

Ndlozi also commented on the article, wondering if the deputy president would be able to express himself quite as well in the flesh.

What is important for us is no longer his written word, but whether he could, without a “prepared script” speak completely about the things he writes or was written for! So Asizi! pic.twitter.com/DWzsq9SdGx