On Wednesday, Western Cape police forcibly removed hundreds of refugees from outside the offices of the UNHCR in Cape Town's CBD. 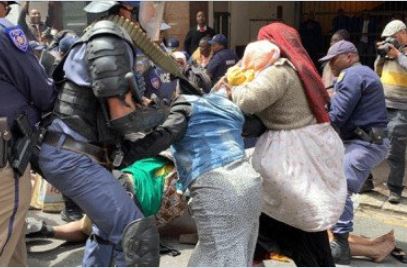 Screengrab from video of foreign nationals being removed by police from the Waldorf Arcade in Cape Town's St George's Mall, 30 October 2019.

The City of Tshwane is seeking intervention from the government to resolve the impasse involving refugees who have been camping outside the UN offices in Pretoria for nearly three weeks.

Mayor Stevens Mokgalapa said a court application was submitted by members of the Brooklyn and Eastern Areas Citizens’ Association and Waterkloof Homeowners Association.

“This legal action comes in response to hundreds of foreign nationals who have settled outside the UN High Commission for Refugees [UNHRC] in Brooklyn.

“The grievance raised by the group is their dissatisfaction with living in South Africa, and they are therefore demanding that the UNHRC relocate them to another country,” Mokgalapa added.

He said it was unfortunate that the City was being thrust into a debacle that extended beyond its mandate, which resulted in it being painted in a negative light.

“However, the responsibility of managing South Africa’s ports of entry, registering refugees and relocation remain under the purview of the departments of home affairs and international relations and cooperation. This is a shared responsibility with the South African Police Service [SAPS] to ensure that law and order are restored.

“As such, ministers Aaron Motsoaledi, Naledi Pandor and Bheki Cele should collaborate to initiate the process of collating information about the foreign nationals in efforts to arrest those participating in unlawful activities and repatriate those who aren’t in possession of legal documentation to reside in the country.”

Mokgalapa said he had written to the three ministers seeking their urgent intervention to resolve the matter.

He added failure to do so would have a devastating effect on the City’s core mandate of an accelerated service delivery programme to Tshwane residents.

On Wednesday, Western Cape police forcibly removed hundreds of refugees from outside the offices of the UNHCR in Cape Town’s CBD.

Foreign nationals and refugees have been conducting a peaceful sit-in protest over safety concerns in South Africa for the past few weeks outside the offices.

Videos of violent removals have been widely shared on social media.