The Premier said the province would help municipalities to procure energy from independent power producers, saying that procurement in the government space was 'complicated and time consuming'. 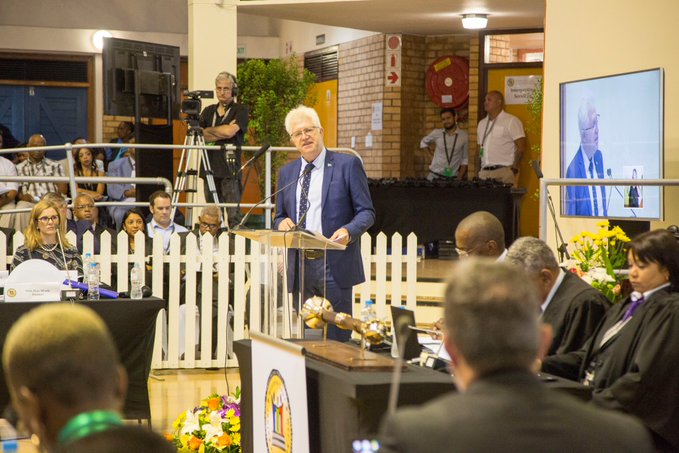 Premier Alan Winde during his State of the Province Address. Image: Twitter/@alanwinde

The Western Cape has some of the world’s best solar and wind resources and has the ability to become the emerging market leader in renewable energy, Premier Alan Winde said in his State of the Province Address on Thursday.

Describing Eskom as the “number one handbrake on economic growth”, he elaborated on the provincial government’s four-point plan to maximise on President Cyril Ramaphosa’s announcement during the State of the Nation Address last week.

Ramaphosa said the government would start the procurement of emergency power from projects that were able to deliver electricity into the grid within three to 12 months from approval, and it would let municipalities procure their own power from independent power producers.

Winde said on Thursday that the province would help municipalities to procure energy from independent power producers, saying that procurement in the government space was “complicated and time consuming”. He committed to provide dedicated support to “speed up a more robust procurement process”.

Small-scale embedded generation, such as solar photovoltaic (PV) technology, would also be increased, he said, emphasising that decreased reliance on the national grid was the key to a more stable energy future.

Government buildings would be made more “green”, Winde continued, saying that “where there is a government rooftop that can benefit from solar, it will be installed”.

Solar systems are already operational at 19 provincial government buildings, he said. Nine other projects are under way.

Municipalities in the Western Cape were being supported and encouraged to make similar investments, Winde said.

Furthermore, his administration would fast track efforts to import liquefied natural gas (LNG) through Saldanha Bay, and enable Eskom’s Ankerlig plant to operate on LNG rather than more expensive diesel.

“Our work has already de-risked these initiatives, and we call on the national government to move with speed to bring LNG to our industries and power plants in the province,” he said.

“Gas to power may also make sense in Mossel Bay. Total is already exploring offshore gas there, and while the outcome is several years away, we are starting the work now to make sure that we are able to maximise the major economic advantages which gas provides.”

He lamented the effect of load shedding on small businesses, such as the butchery of Nawaaz Sablay in Mitchells Plain, which has had to find ways to work around rolling blackouts.

“When Stage 6 hit us on December 9, it was a harsh awakening and we have to be brave enough to admit to ourselves that we aren’t in for a quick fix,” he said.

The national government needs to “move from talk to action as quickly as possible”, Winde urged.

“That said, I still have a few questions in my mind: will municipalities be able to sell the power they procure from independent power producers back onto the grid? If not, then any power produced will be for their own use, solving just a small part of the problem.

“The Western Cape has worked hard in recent years to develop the framework to support alternative energy: 23 of our municipalities support small-scale embedded energy, we have promoted the uptake of solar PV, and we have done a large part of the groundwork required for the importation of liquefied natural gas.

“As a province, we are primed to take advantage of the excellent economic opportunities that green – and alternative energy – present for investment and growth.”