'The media reports are not true. The NCC changed its own view on the selling of tobacco on level 4 of the lockdown,' Mthembu said. 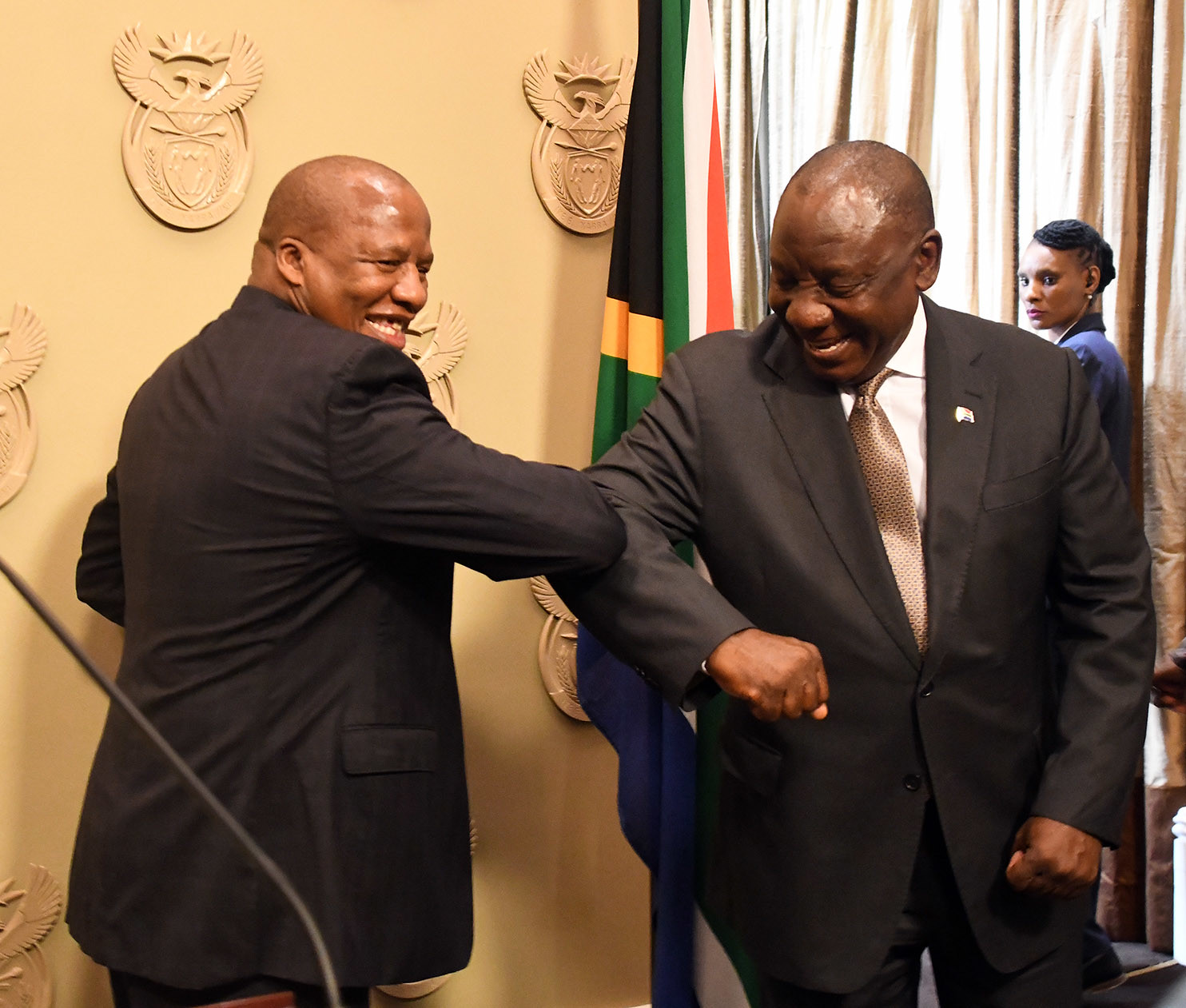 President Cyril Ramaphosa and the late Minister in the Presidency Jackson Mthembu elbow-bump to help stop the spread of the Covid-19 virus. Picture: Armand Hough / ANA

President Cyril Ramaphosa is not being undermined by his own ministers, who extended the ban on the selling of cigarettes and tobacco products, because he fully endorsed the ban, Minister in the Presidency Jackson Mthembu tweeted on Friday.

Last Thursday, Ramaphosa announced the country would exit the lockdown in a phased manner, saying cigarettes, which were banned during level 5, would be allowed to be sold during level 4 which came into effect on Friday.

However, when Cooperative Governance and Traditional Affairs Minister Nkosazana Dlamini-Zuma announced the regulations for level 4 on Wednesday, smokers’ hopes that they can soon light up a legally obtained cigarette went up in flames.

In an about-turn, she said the sale of tobacco products were still banned under level 4 regulations.

In the aftermath, several of Ramaphosa’s political opponents, commentators and the general public speculated he was being undermined by Dlamini-Zuma who was his opponent in the ANC leadership race in December 2017.

On Friday, UDM leader Bantu Holomisa tweeted: “Media reports suggest that the president is being undermined by his own Cabinet ministers. It will be a pity if politics of factionalism is allowed to show its ugly head in the middle of the war. When the president briefs various stakeholders, he always cites NCC [National Command Council] approval.”

Mthembu responded: “The media reports are not true. The NCC changed its own view on the selling of tobacco on level 4 of the lockdown, which was pronounced by the president. The president fully agreed and endorsed the non-sale of tobacco as an outcome of the consultation process.

“Any suggestions that the president was undermined by members of his Cabinet are tantamount to falsehoods and misleading of the public. It’s clear that some lobbyists will use and do anything to get their way.”

On Thursday, Finance Minister Tito Mboweni said at a parliamentary meeting: “I didn’t like the ban on alcohol and tobacco.

“I lost the debate in the Cabinet and therefore, I must toe the line. I lose a lot of revenue [because of the ban].”

On Friday, British American Tobacco South Africa said it would challenge the ban in court if Dlamini-Zuma did not change it by 10.00am on Monday.

Ramaphosa: Without accountability, trust in government is broken
2 days ago
2 days ago
PREMIUM!

Ramaphosa: Without accountability, trust in government is broken
2 days ago
2 days ago
PREMIUM!