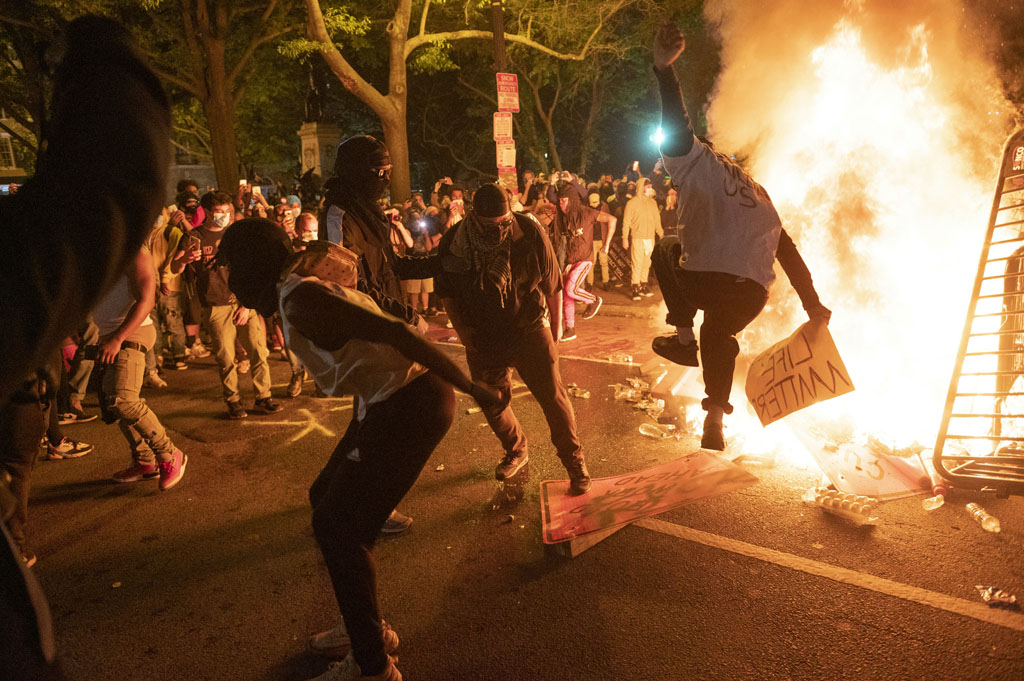 Protesters jump on a street sign near a burning barricade during a demonstration against the death of George Floyd near the White House on May 31, 2020 in Washington, DC. (Photo by ROBERTO SCHMIDT / AFP)

South Africa’s national government said on Tuesday that the “regrettable death” of George Floyd presented the US with an “opportunity to address fundamental issues of human rights, such as freedom dignity and equality”.

International Relations Minister Naledi Pandor said in a statement that, just as the people of America “supported South Africa in its legitimate struggle against apartheid, South Africa too supports the clarion calls for practical action to address the inadequacies highlighted by protesters, civil society and human rights organisations”.

“Recalling the steps post-apartheid South Africa bravely undertook as part of its new constitutional dispensation, we are convinced that America – a beacon of freedom for many worldwide – has the ability to directly focus on healing and peace and achieve an outcome that prioritises respect for and promotion of fundamental freedoms for all Americans,” she said.

Last Monday, police killed Floyd after he was arrested on suspicion of using a counterfeit banknote.

A video taken by a bystander shows an officer kneeling on his neck as he is pinned to the ground. At one point, Floyd is heard saying he can’t breathe.

An independent autopsy later found that Floyd died of “asphyxiation from sustained pressure”.

The official post mortem report recorded the death as a homicide, BBC reported.

Four police officers have since been fired and one of them, Derek Chauvin, has been charged.

Mass protests ensued as Floyd’s death reignited the Black Lives Matter movement that was founded in 2013 to campaign against systemic racism and violence inflicted on black communities.

Pandor called on leaders to work together to end the violence and to “develop a set of measures that would serve to end the insecurity and harm experienced by many members of the African American community”.

“The violence that has characterised some of the protests seriously detracts from drawing international awareness to the legitimate concerns about violence against defenceless black people and other minorities in America,” she said.

The government also called on all in America, “especially the security forces, to exercise maximum restraint in responding to the anger and frustration felt by many of its citizens’ friends and international partners”.

The ANC on Monday also called on Americans and their government to “seek an amicable solution to the current racial impasse”.

National spokesperson Pule Mabe urged the South African government to engage with the US via “established diplomatic channels to diffuse racial tensions and build social cohesion among different races”.