In its current structure, the public protector has 707 posts. In the revised structure, there will be 125 fewer posts, which will entail a saving of more than R48 million. 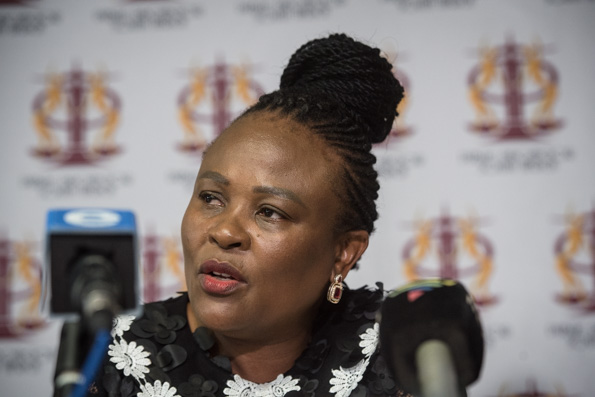 Public Protector Busisiwe Mkhwebane wants to restructure the institution to strengthen its focus on investigations.

However, a looming budget cut could prove to be a spanner in the works.

Mkhwebane, her deputy Kholeka Gcaleka, and the office’s executive team presented a review of the institution’s organisational structure to the Portfolio Committee on Justice and Correctional Services on Friday afternoon.

The public protector’s current organisational structure was approved in 2017, but it has been reviewed to correct an imbalance between the office’s core functions – investigations – and support functions.

Minister of Finance Tito Mboweni was consulted, as required by the Public Protector Act, and he confirmed support of the reviewed structure, according to public protector acting CEO Yalekile Lusibane’s presentation to the committee.

In its current structure, the public protector has 707 posts, but only 351 of it is funded.

In the revised structure, there will be 125 fewer posts, – 582. This will entail a saving of more than R48 million.

Lusibane said that international best practice estimates that the average maximum workload to support timely completion of investigations is between 10 to 25 cases per investigator.

At the public protector, the average annual caseload as at the end of March 2020 was 79 cases per investigator.

Apart from the high caseload, the cases are also getting increasingly complex and time-consuming.

Lusibane said, under the new structure, the caseload will be an average of 49 cases.

Of the 231 unfunded posts in the revised structure, 115 are investigation posts.

Mkhwebane said if they could fund the investigators, it would improve the efficiency of the organisation.

Gcaleka said the restructuring process dealt with legacy issues, which had existed since the inception of the office.

She described the revised structure as a “compromise structure”, due to their budgetary constraints.

When the public protector appeared before the committee in May, acting chief financial officer Tshiamo Senosi said the National Treasury had asked the Public Protector to cut 17% of its 2020/2021 budget, adding this would amount to about R57.6 million.

Gcaleka said they will not be able to realise the new structure if this budget cut is implemented.

Committee chairperson Bulelani Magwanishe said the committee will schedule a meeting to deliberate on the public protector’s plans.

The controversy surrounding Mkhwebane and parliament’s removal process was not discussed.

It also emerged that the public protector was only invited to meet the committee on Monday, and members said it was unfair to give so little time.