The committee payed the hospital a visit on Sunday, after a damning report by the Health Ombudsman into the death of Shonisani Lethole

The main entrance of the Tembisa Hospital in Tembisa near Kempton Park, 20 January 2020. Picture: Neil McCartney

Parliament’s Portfolio Committee on Health has called for the upgrading of the Tembisa Provincial Tertiary Hospital in Gauteng.

The committee made an oversight visit to the hospital on Saturday after a report released by Health Ombudsman Professor Malegapuru Makgoba on the care and death of Shonisani Lethole. Lethole died at the hospital in June 2020.

The Health Ombudsman’s investigation found that the Tembisa Hospital was negligent and that his death was preventable and avoidable. It also found that Lethole had not been fed for more than 100 hours. The damning report also found the hospital was not “ready for Covid-19”.

On Sunday, Dhlomo said the hospital was in need of upgrading, which would serve as a “starting point to resolve problems at the hospital”.

The committee also noted poor record keeping at the hospital. It said management and supervision of junior healthcare professionals must be strengthened and gaps needed to be adequately addressed.

A meeting has been scheduled for this week between the committee and Gauteng Health MEC Nomathemba Mokgethi, and the issue of Tembisa Hospital and the Ombudsman’s report may be raised, Dhlomo said.

“We have to continue to adhere to what the department has pronounced on. The non-negotiables in health are like that and cannot be turned into negotiables. Some of the issues are covered in the presidential health compact and that must be seen to be done and followed by the department. We will hold the department on things that it pronounced on, and that it should really adhere to,” Dhlomo said. 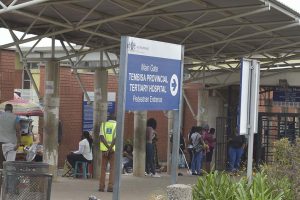 Investigation into Tembisa Hospital 'the tip of the iceberg', says DA
9 months ago
9 months ago

Investigation into Tembisa Hospital 'the tip of the iceberg', says DA
9 months ago
9 months ago