'The matter is being litigated by the parties involved, including the former minister and they all have necessary documents reflecting the instruction to withhold her pension.' 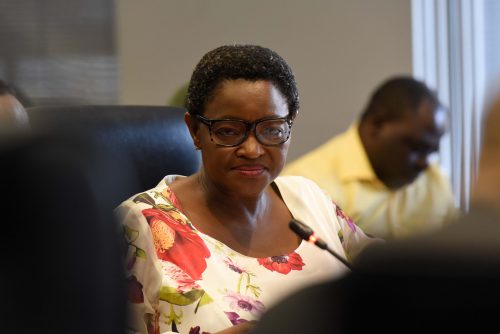 Bathabile Dlamini during the inquiry into her role in the social grants crisis as per the Constitutional Court order at the office of the Chief Justice in Midrand on 22 January 2018. Picture: Neil McCartney

The Department of Justice and Constitutional Development says claims that former minister of social development Bathabile Dlamini’s pension is being withheld for political reasons are false.

Dlamini reportedly said she could not abide by a Constitutional Court (ConCourt) order to pay part of the legal costs two NGOs won in a social grants case against her in 2018, saying her ministerial pension was being blocked, reported the Sunday Times.

This after the ConCourt found in 2018 that Dlamini was “unreasonable” and “negligent” in the manner she handled the social grants debacle.

It further held her personally liable for 20% of the litigation costs incurred by Black Sash and Freedom Under Law during their court challenge to the first extension of the Cash Paymaster Services contract for the payment of social grants.

Politics not behind instruction

While the department has confirmed Dlamini’s pension is being withheld, it rubbished claims that it was due to political reasons. In fact, Dlamini is aware of the reasons, it added.

“We want to categorically state that such reports are unfortunate, without substance and are devoid of any truth. The information before the solicitor-general reveals that the instruction to withhold the payment of the former minister’s pension was received from the South African Social Security Agency [Sassa].

“Reasons for the withdrawal of the pension are well known by the former minister and Sassa and thus far no party has contested them nor has there been any intention to do so. The state attorney acts upon the instruction of its client, which are the departments and state entities that it represents,” it said on Wednesday.

“The matter is being litigated by the parties involved, including the former minister and they all have necessary documents reflecting the instruction to withhold her pension.”

“Politics do not play any role whatsoever in the work of the state attorneys office and insinuations suggesting otherwise are malicious and should be outrightly rejected.”