Zuma arrest: Msholozi could be home before Christmas

Zuma will not receive any preferential treatment during his prison term at the Estcourt Correctional Centre, according to officials. 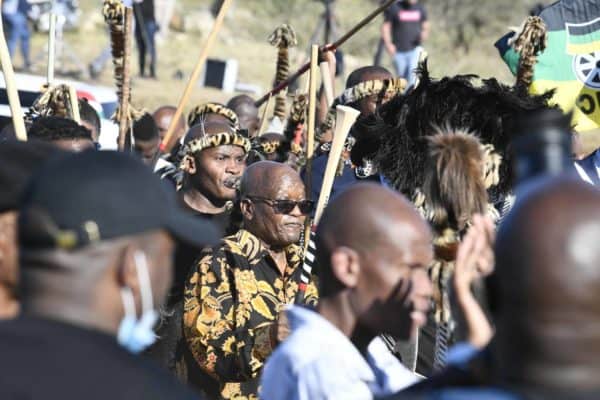 Minister of Justice and Correctional Services Ronald Lamola says former president Jacob Zuma will be eligible for parole once a quarter of his prison sentence has been served.

ALSO READ: Can Zuma ask for a presidential pardon after defying courts?

Lamola briefed the media on Thursday to outline the Correctional Services processes to be followed for Zuma after the former president decided to hand himself over to the authorities on Wednesday night.

On Wednesday night there was confusion and chaos in Nkandla whether Zuma would indeed be arrested and begin serving his sentence, as the clock ticked toward the deadline for his arrest after missing the 4 July deadline to hand himself over to police.

Just before midnight a convoy of SUVs was seen speeding out of Zuma’s homestead, with police later confirming the former president had been arrested and would be spending the night in prison.

The former president was slapped with a 15-month jail sentence when he was found guilty of contempt of court by the Constitutional Court (ConCourt) last Tuesday for failing to comply with the court’s ruling forcing him to appear before the Commission of Inquiry into Allegations of State Capture.

‘Not a moment of celebration’

Speaking outside the Estcourt Correctional Centre in KwaZulu-Natal, Lamola confirmed that Zuma was admitted to the facility, which has a bed capacity of 512 inmates, in the early hours of Thursday morning, saying the former president’s incarceration was not “a moment for celebration”.

“This is not a moment for celebration or triumphalism. It is a moment of restraint and to be human, in line with our mandate as correctional services to treat all inmates in terms of the Nelson Mandela rules which are universal rules for the treatment of inmates,” Lamola said.

He said Zuma was in the facility’s hospital section for assessment and would be isolated there for 14 days in line with Covid-19 protocols.

“Furthermore, he will be assessed by our medical team in conjunction with the South African health military service and this will determine the conditions of his incarceration. This assessment is done to determine the major risks and needs of the offender.

“A complete profile report will then be submitted with recommendations to the case management committee. This process will assist to determine the appropriate classification of the former president.

“All of these systems are in place to ensure that incarceration is done in a manner which is not retributive, but humane,” he said.

Lamola also said the former president would be eligible for parole once a quarter of his prison sentence has been served.

“It should be noted that in terms of Section 73 (6 A) of the Correctional Services Act, an offender serving a determinate or cumulative sentences of not more than 24 months, may not be placed on parole or day parole until such offender has served either the stipulated non-parole period, or if no non-parole period was stipulated, a quarter of the sentence.

READ MORE: Jacob Zuma, like Al Capone, was tripped up by ‘the small crimes’

“In this case, there is no stipulation for the non-parole period. This effectively means the former president will be eligible for parole once a quarter of his sentence has been served.”

Lamola further said Zuma would be “afforded dignity” during his stay in prison. He added that Zuma would not receive any preferential treatment.

Lamola said Zuma was in good spirit despite everything that had taken place on Wednesday night.

While the Pietermaritzburg High Court is expected on Friday morning to deliver its reserved judgment on Zuma’s application to have his imprisonment stayed, Lamola is waiting on the judgment to see how they will move forward.

ALSO READ: #BookTitlesForBaba: Should Zuma write an autobiography in prison?

“On the issue of what will when the Pietermaritzburg High Court makes a ruling tomorrow, we will cross that bridge when we get there. We all don’t know what the judgment is going to be so we will await the judgment and upon release of the judgment we will study it and it will direct us what to do.

“[This includes] the ruling that may come out of the ConCourt in the hearing on Monday. We all don’t know when the ConCourt will make its ruling so we will wait and be guided by the court,” Lamola said.

Meanwhile, Mpumi Hadebe, Head of Estcourt Correctional Centre, revealed that Zuma will only have access to television in prison and that he will will have access to a public phone, adding that he will be allowed four calls a month if he is a maximum prisoner.

She also said that the former president would not be  allowed to see any visitors due to Covid-19.