In Ramaphosa's eulogy, he said Mkhize was special, a compassionate leader, and had achieved so much, yet remained humble and steadfast. 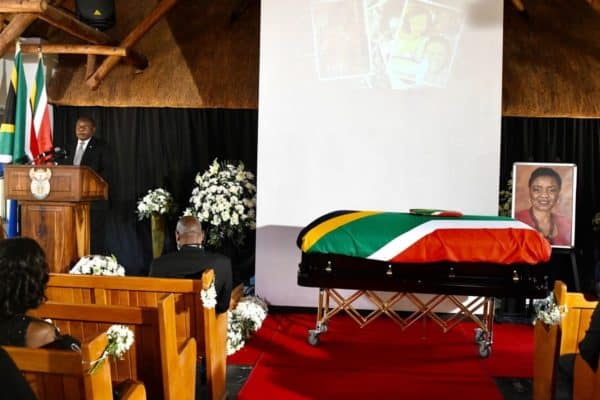 An official state funeral underway for the late deputy minister in the Presidency for Women, Youth and Persons with Disabilities, Professor Hlengiwe Mkhize. Photo: Twitter/@PresidencyZA

Saturday was a day of mourning for government officials, family and friends of the late deputy minister in the Presidency for Women, Youth and Persons with Disabilities, Professor Hlengiwe Mkhize.

Mkhize was laid to rest at the Fourways Memorial Cemetery today, during an official state funeral eulogised by President Cyril Ramaphosa.

She passed away on 16 September, after a brief hospital stay, owed to her continued battle with lung cancer.

Mkhize was diagnosed with the illness in 2017, but kept her struggle under wraps, while continuing to serve the people of South Africa.

Read Ramaphosa’s full eulogy in memory of Mkhize below.

​​Today is a sad day indeed.

It also a day when we remember and mourn a great South African.

On behalf of the government and the people of South Africa I convey my deepest sympathies to the family of our dear Professor Hlengiwe Mkhize.

Her passing was so sudden and the news came as a shock to us all.

Professor Mkhize was a fine public servant who served her country with diligence. This is a real blow to the administration, to our team in the Presidency, to the Ministry, her colleague Minister Maite Nkoana-Mashabane and to the country at large.

This is Public Service Month, a time when we acknowledge the efforts of the many men and women who embody service, and who are committed to making our country work for our people.

Deputy Minister Mkhize was an exemplary public servant, amongst the finest. She was dedicated, committed, hardworking and the consummate professional.

Since 2019 she served as Deputy Minister of Women, Youth and Persons with Disabilities in the Presidency.

Before that, she held various positions in the National Executive; as Minister of Home Affairs, and as Minister of Higher Education, Science and Technology in the fifth Administration.

This is an extremely broad range of experience. It is testimony to Professor Mkhize’s

versatility, her adaptability and above all the depth of her expertise.

I regard her as a woman of all seasons. She was fit for purposes in whatever role she

We knew that whatever portfolio she was assigned to, she would throw herself fully into it, and take it upon herself to become fully acquainted with the sector and its  issues. She also served as Chairperson of Parliament’s Portfolio Committee on Communications.

Comrade Hlengi was a tried and tested member of her organization, the African National Congress. She was a member of the National Executive Committee and also served as Treasurer-General of the ANC Women’s League.

Deputy Minister Mkhize has left a void in the ANC, the more so at this crucial time when we are preparing for local government elections.

During this time, we were counting on seasoned leaders like her to rally people to participate in the elections in November.

No doubt she would be out with us in our communities, her mask on, bag firmly in hand and in a pair of sensible flat shoes for door-to-door. She had boundless energy and a cheerful spirit, even when she was not well.

I will miss running into her in the corridors at Luthuli House where she’d pull me aside for a quick chat that was the classical elevator pitch; concise, to the point. When she spoke of problems, she also told me how she was resolving them.

Abraham Lincoln once said that character is like a tree, and reputation it’s shadow.

The shadow is what we think of it, but the tree is the real thing.

Comrade Mkhize was of both good character and good reputation. She was the real thing.

At a time when ethical servant leadership is being called for, this accomplished but humble leader is the example we all look to.

I have over the past few days heard her described as both thoughtful and compassionate, something that I wholly agree with.

Her training as a clinical psychologist gave her a deep understanding of the needs of our people, particularly those of children, of vulnerable women, and of people with special needs.

DM Mkhize served as a Commissioner on the Truth and Reconciliation Commission (TRC), and played a formative role in the Reparations and Rehabilitation Committee, and the Returning and Settlement of Political Exiles Project.

Being a TRC Commissioner gave her firsthand insight into the effects of apartheid on the collective psyche of our nation, and on the appropriate interventions needed to heal these deep wounds.

We will remember her for her humanism.

She believed, as should we all, that the wrong people make in life do not make them undeserving of a second chance.

For her, everyone deserved an opportunity to better themselves, something she strongly advocated for during her work with the South African Prisoner’s Organization for Human Rights.

She was part of the ‘Free our Innocent’ project in 2009, a collaboration between the Durban-Westville Correctional Centre and the Quadpara Association of South Africa (QASA) to take care of the vulnerable in correctional centres and in adjacent communities.

One of the projects was building ramps and mobility aids at the homes of the persons with disabilities, which they did in Chesterville in Kwa-Zulu/Natal.

Professor Mkhize had a successful career as a diplomat.

During her tenure as an Ambassador, she also served as Vice President of the Member States at the International Criminal Court in The Hague.

She was Chairperson of the Council of Member States in the Organization of the Prohibition of Chemical Weapons, and also led a TRC delegation to Rwanda to advise the government on Transitional Justice mechanisms.

Professor Mkhize was also an established academic who studied at the Universities of Zululand and Witwatersrand as well as abroad in the US in the 1980’s. During her time in the US she actively mobilized against apartheid.

DM Mkhize had a passion for gender justice.

She was a committed activist who served as the National Convener for the Progressive Women’s Movement of South Africa since 2012.

South Africa is part of a UN initiative called Generation Equality, a global campaign to achieve gender equality by 2030.

Together with Minister Nkoana-Mashabane she lent form and substance to our participation on this platform.

The Ministry has been vociferous about gender mainstreaming in all departments, including involving members of the LGBTQI+ community. She also championed the National Strategic Plan to Combat Gender-based Violence and Femicide that we launched last year.

Professor Mkhize was one of the leading advocates for sign language to be officially declared the 12th official language, and for it to be professionalized and incorporated into the curriculum of our education system.

Whilst at the then Department of Telecommunications and Postal Services, DM Mkhize championed initiatives to harness ICT for the political, social, and economic empowerment of women.

She strove for digital gender inclusion, opening various centres in marginalised areas to enable women to access technology and participate in the opportunities presented by the digital economy.

Death stalks us all.

None of us knows when our time on this earth will end. What is important is that we use this life to sow good works that outlive us.

Our departed colleague has left behind many good works.

But what she has also left behind is a reminder that the values we live by define us more than what we wear, the languages we speak, where we live, and what we have or do not have.

She loved her country.

She was a compassionate leader. She was a peace-maker and a bridge-builder. She was an influential leader, but she was humble. She was respectful of our people, and in turn earned their respect. She was an honest leader.

The words of the prayer of St. Francis of Assisi inspire us all at this time when we are called upon to be servant leaders, and where each citizen is called upon to live by the values of our noble Constitution.

“Where there is hatred, let me sow love.

Where there is injury, pardon.

Where there is doubt, faith

Where there is despair, hope

Where there is darkness, light

Where there is sadness, joy.

For it is in giving that we receive.”

May we live by these words.

When we depart from this life, may it be said of each of us that we were of good

character and of good reputation.

It is this that will be remembered above all else.

To the Mkhize and Ngobese families at large, we are sorry for your loss.

She was one of a kind. We will miss her dearly.