Staff, patients test positive for Covid-19 at another Durban hospital 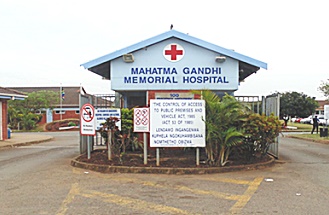 “Management confirmed the total of six nurses and four patients are positive. In terms of compliance, they say they have enough personal protective equipment [PPE] and all other safety measures are there,” Nehawu’s provincial secretary, Ayanda Zulu, said on Thursday.

He was speaking at the Anew Hotel in Hilton, Pietermaritzburg, on the sidelines of the welcoming of 28 Cuban doctors in KwaZulu-Natal who are assisting with Covid-19 infections.

Zulu said the union would be meeting with the hospital on Monday.

“We have another follow-up meeting on Monday because there are things we have requested from management to disclose – like the actual quantity of the PPE, the actual data on whether workers were trained or not on Covid-19 so we will be able to establish if the employer complied or not.”

“This morning, I spoke to department officials and they stated that the affected ward has been decontaminated and affected staff members were tested and in isolation. There are 35 that are awaiting their results.”

He said a uniformed protocol for all hospitals had to be created.

“In some hospitals, the entire facility has been closed down, but we see that has not happened here. We need better communication and the portfolio committee for health has to be kept in the loop.”

A hospital board member, Sham Maharaj, told East Coast Radio, according to a hospital report, a patient, who went to the hospital, did not declare their symptoms, leading to suspected cases.

Maharaj told the broadcaster on Friday they were waiting for the results and in 24 hours they would know.

SABC also reported that some decontamination was underway after six nurses and four patients tested positive.

Responding to the reported infections, Simelane-Zulu on Thursday said they had not officially received reports of cases of Covid-19 at the popular hospital that caters for the greater Phoenix community.

She said rumours of a patient’s death due to Covid-19 complications could not be confirmed either.

“We don’t have a patient we passed on in our statistics. We get a list of people who have passed on, on a daily basis. Today, we have people who passed on yesterday. If there is any wrongdoing, we will follow it up.”

She said cases of people with Covid-19 coming into the public health system would become commonplace in the next few months as cases exponentially increase.

Simelane-Zulu added they had taken precautions at all public facilities.

“The issue now is [about] how the case will be treated when it gets to a facility. Are we able to separate people? We are creating quarantining areas. We also created isolation areas where people are affected.”

The hospital’s public relations officer, Sharan Thomas, said: “All Covid-19-related matters are dealt with at the MEC’s office.”

Earlier, Denosa, Nehawu and Simelane-Zulu expressed disappointment over a report regarding the infection of 135 people at St Augustine’s Hospital.

While Simelane-Zulu bemoaned the lack of protocol, saying the minister and department had not seen the document until it was released in the media, the unions described the report as watered down.

They said most of the information did not explain how the hospital had failed and rather contained a barrage of information that was already public knowledge.

Netcare welcomed the report, saying remedial measures have been taken.