Mkhize vows deal for private hospital beds will benefit all

Mkhize said medical staff would also be brought into the state system - in particular general practitioners and specialists. 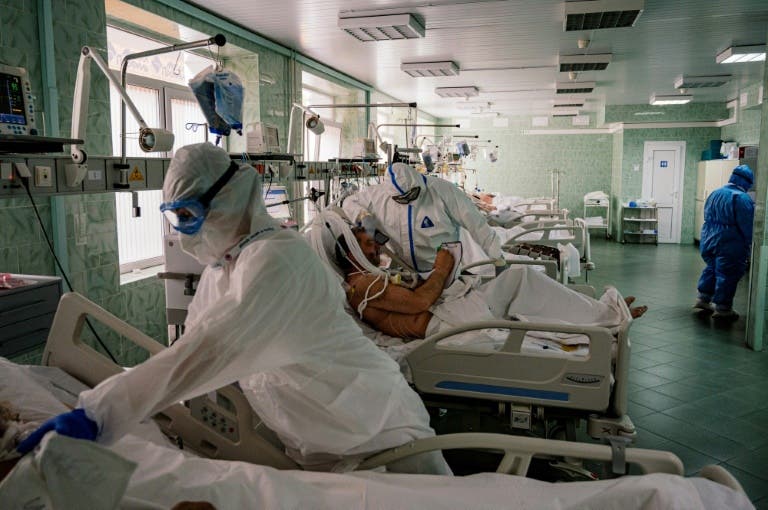 Picture for illustration. Health workers -- from cleaning crews to doctors, in hospitals and nursing homes -- have been hit hard by the pandemic. AFP/File/Dimitar DILKOFF

South Africans who cannot afford private healthcare will still benefit from a deal the government is negotiating with the private sector for Covid-19 beds.

This was the commitment from Health Minister Zweli Mkhize on Tuesday.

He said he had offered this as an assurance to state healthcare professionals concerned about a shortage of beds in state hospitals.

Speaking at the Sonstraal state facility in Paarl on Tuesday where extra beds had been installed to prepare for a “surge” in Covid-19 cases, Mkhize added negotiations between the government and private hospital associations would be completed by Tuesday.

“What we want to insist on is: We will use the beds in the private hospitals – we have agreed on that.

“There will also be one protocol, for the patients. So there’s no such thing as ‘this one will be treated differently because they come from a public hospital [or] they’re from a poor community’.

“Everyone’s going to get the same treatment. That is an undertaking we are making,” he vowed.

The negotiations involved one point of agreement only: the price.

“Between the national department and the hospital association, our discussion is going to be about the price – how much are we prepared to pay.

“The provincial department will then negotiate, hospital-to-hospital, where they need to place patients.”

“There will never be a situation in which government facilities will run out of hospital beds, but the private sector has got beds – it will never happen like that,” Mkhize said.

“Especially when we need intensive care or high care – we’ll make sure those people get access at that kind of level.”

He added he did not wish this commitment to be complicated by behind-the-scenes negotiations, saying: “The issue of how we fight about the prices is a back office operation issue.”

Mkhize said his message to healthcare professionals in the state system was: “So, moving forward, we do not expect that if there’s a gap between the time at which your beds are coming on to stream, and you the private sector has beds, and you think you have more patients – no patients must fall into the cracks. We will not leave any patient behind. I want to make that very clear.”

This was to ensure “our people are given adequate attention”, he added.

Mkhize said medical staff would also be brought into the state system – in particular general practitioners and specialists.

“We want to make sure we have enough back-up from the private sector – to see how we can help each other.

“So as you go about doing your work, you will get as much support as you need to make sure we can defeat this virus.”

Mkhize said the government’s negotiations with the hospital associations were being handled by the health department’s newly appointed director-general, Dr Sandile Buthelezi.