An unofficial health warning has been issued after government's lack of transparency in what chemicals have leaked into rivers and oceans since last week. 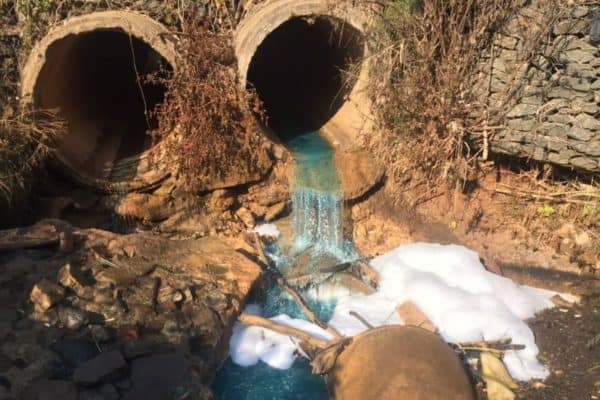 Chemicals spilling into rivers from last week after a UPL warehouse storing many dangerous chemicals was hit by widespread looting. Photo: Supplied

A serious, albeit unofficial, public health warning has been issued by the South Durban Community Environmental Alliance and groundWork, following a plethora of hazardous chemicals that leaked out of a UPL warehouse in Cornubia last week.

The warehouse was one of many targeted during widespread looting, violence and unrest in Gauteng and KZN, and has since seeped toxic, hazardous chemicals into the Ohlanga river and Umhlanga lagoon.

Residents of Umhlanga, Umdloti, La Lucia, Durban North and surrounding areas are being urged to take health precautions to reduce their exposure to both airborne and waterborne chemicals by adhering to the following safety measures:

The organisations also provided a list of health effects. If you or a loved one is experiencing any of the following symptoms, make sure to visit a health physician as soon as possible.

Although symptoms are generally mild and can be resolved without treatment, residents with pre-existing health conditions such as asthma, respiratory diseases and heart problems may experience an aggravation of symptoms.

This ranges from a tight chest to shortness of breath and wheezing.

It is not yet known what the longer term effects of the chemical exposure could be, due to the failure of the warehouse and local authorities to disclose exactly what pollutants ran into stormwater drains, and into rivers, lagoons and oceans, the organisations added.

In a statement issued last week, the eThekwini municipality closed all beaches north of the imagine estuary after the chemical spill.

The municipality also warned against consuming any marine life killed in the spill, and that many species of fish, crayfish and birds have already succumbed to the toxic pollutants flooding the water.

UPL says nothing (really) to worry about

To rub salt in an embattled city’s wounds, UPL, the company who owns the Cornubia warehouse where the spill occurred, said the fire continues to smoulder, with parts of the structure already demolished.

The company also said it consulted extensively with Griffon poison information centre’s Dr Gerhard Verdoorn, who said there was “a minimal risk” of long-term health effects to people exposed to the chemical plumes.

“It needs to be emphasised that a number of the products were bio-stimulants and foliar feeds which are water based, with micro-nutrients and some biological beneficial organisms, and do not represent a health concern”.

According to UPL, many fungicides and herbicides were “probably destroyed” by the heat of the fire.

It added that herbicides such as chloroacetamides and phenoxycarboxylic acids “may not have burned out completely”.

Residents are being advised to double up on mask wearing, and to lubricate their dry noses with nasal tract remedies or pure petroleum gels.

Those with scratchy throats should flush with salt water and gargle with extra virgin olive oil, and itchy, red eyes should be washed with “good soft soap and cold water”, UPL recommended.