The gunman fired a shot out of nowhere at the very moment that Coco ran back into the driveway. 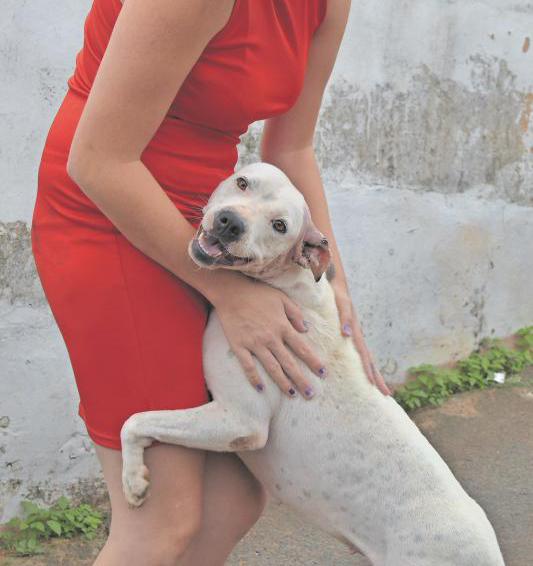 Despite being shot, Coco is still a happy and healthy dog who just wants to be cuddled.

For a Woodlands woman, the phrase ‘a dog is a man’s best friend’ rang true last Friday, 6 April, when her three-year-old pitbull took a bullet for her, Southlands Sun reports.

The woman, who asked not to be named out of fear for her safety, said she was standing near her car with her boyfriend outside their Woodlands home in KwaZulu-Natal when she noticed two men staring at her a short distance away.

The woman explains that she felt something was ‘off’ about them.

“I looked at the two men again and they suddenly put their heads down and began running towards us. The one attacked my boyfriend and hit him on the head with a gun. He threatened him with the firearm while the other came for me, trying to pry my wallet out of my hands,” she recalled.

The couple fought back as the robbers were attempting to steal the car keys. The woman ran towards her gate, and her pitbull Coco ran after her boyfriend, who was trying to escape from the hijackers.

“I could hear one of the men scream ‘I’m going to shoot you!’. Then I heard my mum who was in the house scream ‘duck!’. The armed men came into the property and pointed a firearm at me,” she said.

The gunman then fired a shot at the very moment that Coco ran back into the driveway and jumped for the gunman. As a result, the pitbull was shot in the ear. Coco took a bullet that was meant for her owner. Luckily it only hit her ear and she will recover.

“She ran out of the yard and was missing for three hours. We found her later. We knew she had been injured because her blood had spattered on the walls. She jumped in front of the bullet meant for me. I did not expect this dog to do something like that,” added the woman.

The bullet nipped Coco’s ear and exited at the bottom. At the vet’s office, Coco received staples and stitches – a small injury for her massive heroic act.

The loud gunshots saw neighbours respond and the woman’s mother contacted Montclair Crime Eye, who then notified Montclair SAPS and the sector policing forum for Yellowwood Park and Woodhaven, who all came to the family’s aid.

“Coco arrived in my life three years ago and she is like my child – I loved her from the first moment I saw her. Coco, I know you will never understand but on Friday night you have saved our lives. You are a true hero and a blessing in our lives,” the woman said.