The Sonlal family battles to come to terms with their son’s suicide. 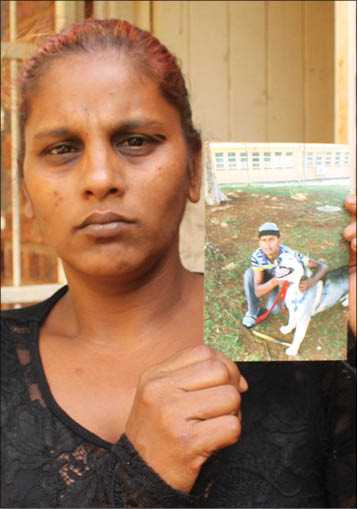 Tina Sonlal with a picture of her son Akshay in happier times.

The distraught Sonlal family are battling to come to terms with their 20-year-old-son’s suicide and firmly suspect foul play, Pietermaritzburg Public Eye reports.

Akshay Sonlal was found hanging from a tree on Monday morning by his grandmother Reena Prakash.

A pair of red work gloves that were hanging from a neighbour’s washing line was also discovered at the scene. According to the family, no one knows how the gloves got there. 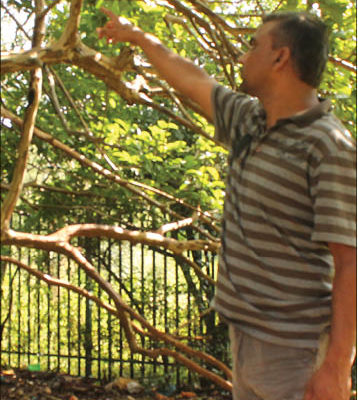 Deresh Prakash points to the tree Akshay was found hanging from.

Akshay, the eldest son of six children, was described by his family as a happy-go-lucky young man. His stepdad, Deresh Prakash, said that although he had a drug addiction, he had his life under control.

“He was a good boy who in the past two years had problems with drug addiction. He chose to live with friends but he did visit us often. We are shocked and baffled by his death. We are equally concerned about the gloves that were found near his body and how it got there. There is definitely something more to this. We don’t believe Akshay would have ended his own life,” said Prakash.

According to Prakash, Akshay showed no signs of being in trouble or having problems.

However, since his passing, they have heard rumours of him owing money to a friend.

“On Sunday at about 5pm he came home and spoke to his sister. He also had a meal with us. That was the last time we saw him. On Monday morning, my mum walked up to my sister’s house and on the way back she started screaming. I heard her screams and assumed she was being attacked but when I got to her, she pointed to Akshay’s lifeless body. He was hanging from a guava tree in his grandmother’s yard. His feet were still on the floor but when I went to get him down his body was stiff and cold,” said a distraught Prakash.

“Despite Akshay’s drug problem, he had a good relationship with us. If he was in trouble, he would have spoken to us as he always did. I really don’t understand why this happened. Over the years we have tried to help with his drug addiction. I sent him to rehab and took him to various doctors to get help. He would have celebrated his 21st birthday this June. I miss my child. We are now waiting for the results of the autopsy report,” said Sonlal.

Since the recent mortuary strike and subsequent backlog of bodies, the family is still waiting to get their son’s body.

The family is being assisted by the chairperson of Northdale Hospital, Rachel Soobiah, to get Akshay’s body. “We are grateful to Rachel for her help,” Soobiah said.

Gauteng govt not doing enough to prevent spike in suicides, says DA
4 days ago
4 days ago

Gauteng govt not doing enough to prevent spike in suicides, says DA
4 days ago
4 days ago