A young kudu bull is currently running rampant in the town of Middelburg. The Kudu bull spotted by Middelburg resident Gordon Venters this morning is in the process of being released back into the wild, Middelburg Observer reports.

Dr Tobie Spies, a vet from Central Vet, tranquilised the Kudu before they made their way to the Loskop Nature Reserve, where the young bull will be released.

The Kudu broke his jaw when he leaped from the HTS auditorium.

Dr Spies treated the Kudu before loading him into a truck. The Kudu visited an Engen Garage, the local OK Grocer and HTS Middelburg, before settling in a property to seek shelter, which is where he was tranquilised.

He was running across the road towards the south of the small town.

Residents on their way to work were surprised to see a Kudu on their commute this morning. Photo: Wikus du Plessis.

Moments after the spotting this morning, Middelburg Observer’s offices were flooded with phone calls. 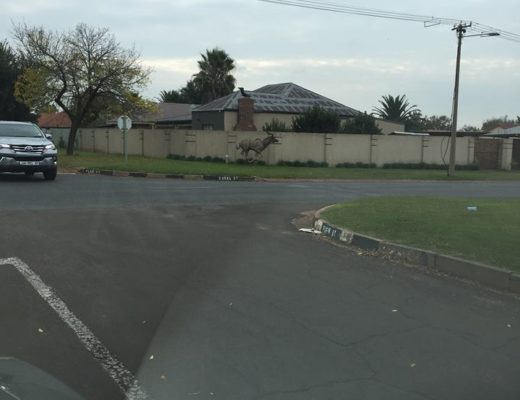 The Kudu has run around the town of Middelburg looking for shelter. Photo: Wikus du Plessis

The Kudu also managed to run through the auditorium of HTS Middelburg technical high school this morning. 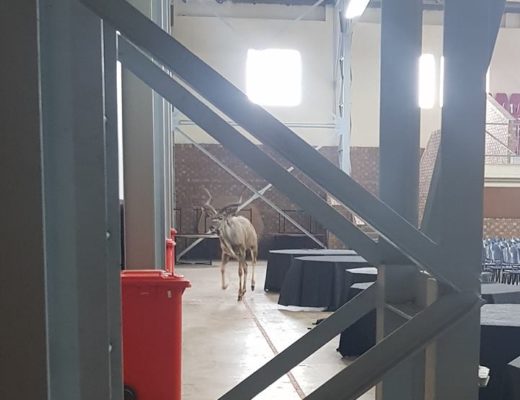 The latest reports suggest that the kudu is currently trapped in someone’s yard. Residents are standing by as vets arrive to tranquilise him.

The town of Middelburg has had strange animals wandering the streets before. The list includes otters, monitor lizards, puff adders, a black mamba, baboons, apes, mongoose, warthogs and spotted Genets, but never a Kudu.