After being found at Empangeni Mall, the mamba was later safely released where it would not pose a risk to humans. 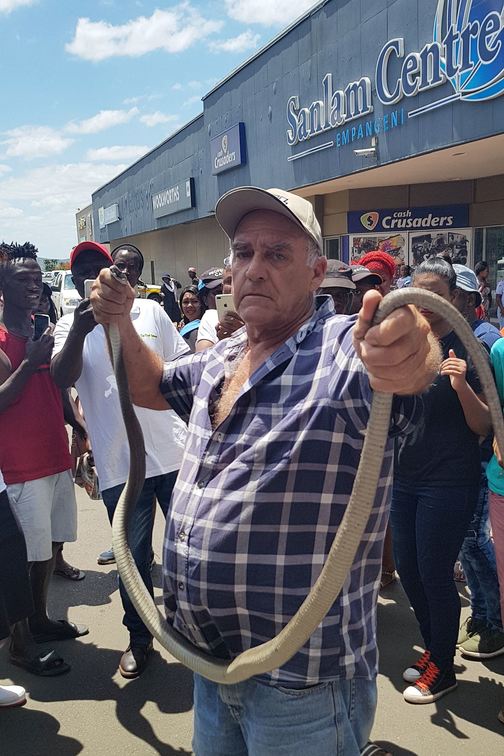 Laid-back Sunday shopping at the Empangeni’s Sanlam Centre suddenly turned into jittery excitement when a 2.3-metre black mamba decided to make itself at home in the mall’s parking lot.

Local snake handler Fred Lubbe took to Facebook to describe how was able to keep his cool while trying to navigate a tricky capture of the world’s fastest and one of the deadliest snakes, reports Zululand Observer. Fred holds on tightly to the snakes head – behind him is the vehicle which the snake had taken refuge under – PHOTO: Facebook/Fred Lubbe

“At 12:15pm I received a call from the Sanlam Centre saying that there was a massive snake under a car in the parking lot,” the Facebook post read.

“I got there and could not miss where it was as there was a huge crowd of people standing around the parking (lot) looking at the car.” 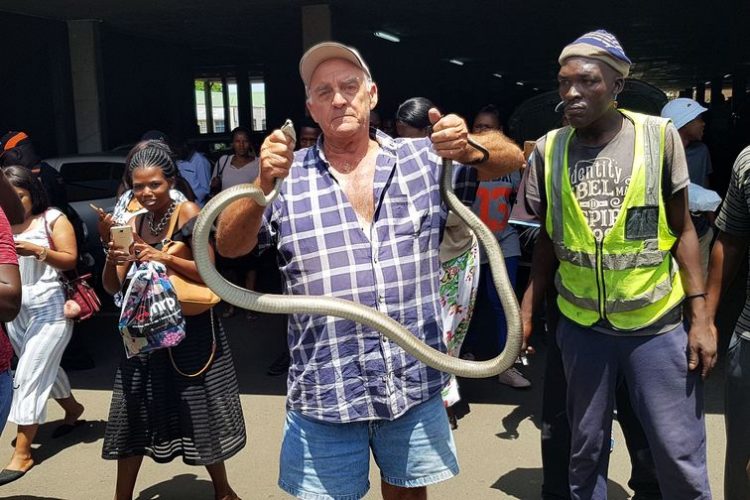 A large crowd gathered to witness the capture of the world’s fastest snake and one of the most deadliest – PHOTO: Facebook/Fred Lubbe

“I had it jacked up as I thought it must be laying on the one cover under the middle of the chassis.

“I hit the cover with the back of my snake hook to drive it out if it was there.

“Then with my head near the back left wheel I looked to see if it is not on the petrol tank. When I shone my light onto what I first thought to be a rubber pipe, I saw the scales and knew I found what I was looking for.” Lubbe said he released the snake in a safe place habitat.

Black mambas are considered the deadliest snake in Africa and about the sixth most deadly snake in the world, owing to the fact that it can move at speeds of up approximately 20 km/h (5.5 meters per second), and its bite can kill a human being in less than 30 minutes.