Knysna police confirmed a case has been opened after a man was seen dropping allegedly poisoned meatballs. 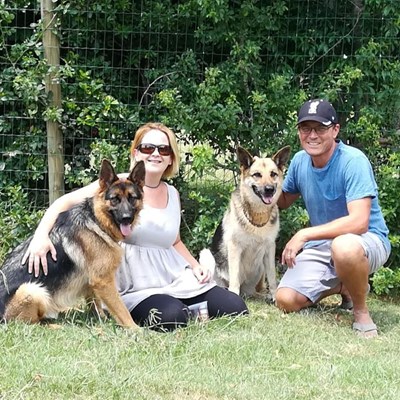 Christine and Darren Buddle with their two German shepherds.

A family in Lindsay Street, Hunters Home, in Knysna are fearing for the lives of their two beloved German Shepherd dogs after a man threw poisoned meat into their yard on two separate occasions. But the man in question refutes the allegations, calling the complainant ”paranoid’, reports Knysna-Plett Herald.

CCTV footage capturing the second incident shows the man walking past the house, only his figure and barely his head visible through wooden palisade fencing. Balls of mince are seen dropping on the ground as he walks away. But a woman notices and makes a scene – shouting and screaming in panic. The woman, Christine Buddle, said that she was “hysterical”.

ALSO READ: Seven dogs poisoned in Centurion in one weekend

“I was absolutely livid and started screaming at him. My husband heard the commotion and ran outside, jumped the fence and questioned him. But we got no answers. Allsound Security was also present. We called the police and laid a charge,” she said.

‘I found little pellets inside the mince’

The first incident occurred on that same morning, January 11, says Buddle. She was walking in her garden and noticed two balls of mince. “I picked it up to inspect it, and found little ‘pellets’ inside – indicative of rat poison”.

Buddle said she hasn’t had it tested yet, because “it is the police’s job to do so”.

“I was absolutely fearful thinking about why someone would want to poison my dogs. Does someone want to break into our house? Attack us? My mind was all over the place,” she said.

A neighbour offered to lend her a CCTV camera, which was quickly installed. That evening, at around 8pm, the second incident unfolded.

“Everything has been captured on video footage, I still have the mince balls as evidence. We really want police to investigate this,” she said.

‘Why target my dogs specifically?’

Buddle added that she was clueless as to why someone would want to poison her precious dogs.

“Their barking is not excessive, and there are lots of dogs in this street. Why target mine specifically? None of this makes sense.”

The accused, Reinhardt Stompe, who manages a guesthouse nearby, denied any wrongdoing and said the woman accusing him was “paranoid”.

“I live near their home and I go jogging every evening. I didn’t try to poison the dogs. The police have not questioned me,” he said. 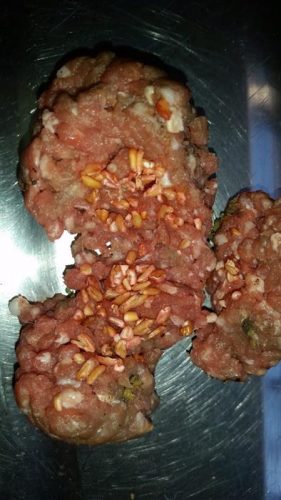 Knysna police confirmed that a case had been opened.

They released a statement saying: “The Knysna detective branch is investigating a case in terms of the Animal Protection Act that was reported on 11 January 2019 at Lindsay Street, Hunters Home. It is alleged that the suspect poisoned a dog of the complainant. Investigation into this matter is ongoing and the suspect hasn’t been arrested yet.”

Buddle said all she wanted was for justice to take its course.

“My dogs were nearly killed and we need to know his motives. Police must investigate this incident as a matter of urgency.”