The woman arrived at the shopping centre and told a taxi driver she was going to the bathroom, before jumping from the building. 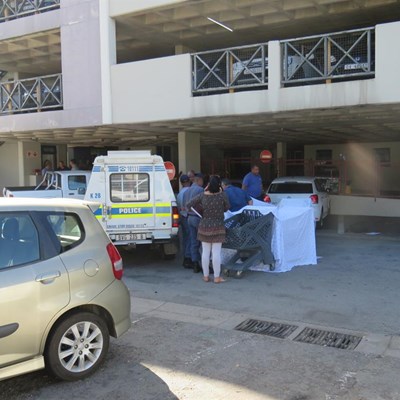 The scene in the parking lot at Woodmill Lane shopping centre after a woman jumped from the third floor. Photo: Nwabisa Pondoyi

A Plettenberg Bay woman in her 50s committed suicide by jumping off the third floor of Woodmill Lane shopping centre’s parking lot on Wednesday, just before lunchtime, reports Knysna-Plett Herald.

Emergency vehicles responded to the scene.

According to Knysna police’s Lieutenant-Colonel Siddique Khan, who was present at the site when Knysna-Plett Herald arrived, the unconfirmed information they had was that the woman apparently arrived at the centre by taxi, left her handbag with the driver and after making a call to her son, told the driver she was going to the restroom, before jumping from the building moments later.

Her name has been withheld out of respect for the family.

Gauteng govt not doing enough to prevent spike in suicides, says DA
7 hours ago
7 hours ago Gauteng govt not doing enough to prevent spike in suicides, says DA
7 hours ago
7 hours ago