Matshidiso Mothiba ran a successful tavern in Pretoria, which is now being used as a home for more than 100 destitute children. 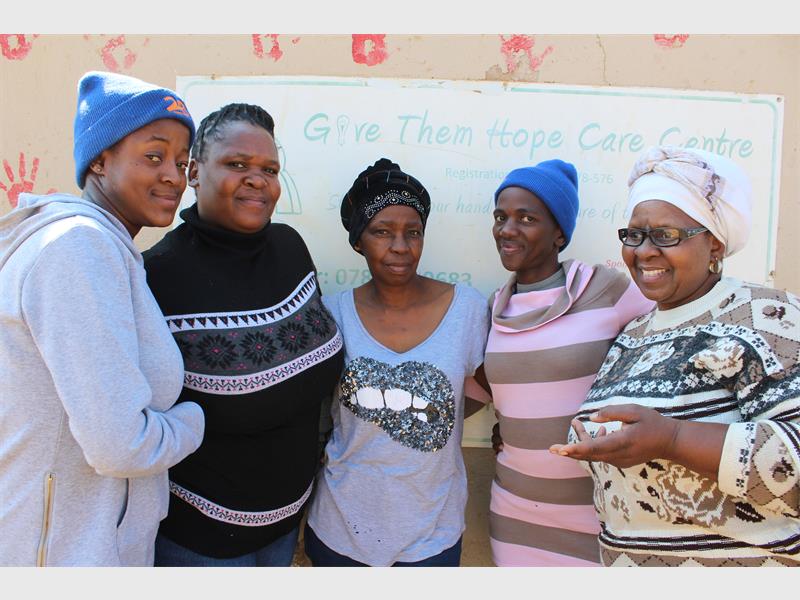 Founder of Give Them Hope Foundation Home, Matshidiso Mathiba in Nellmapius Extension 2 together with the volunteers.

A Nellmapius former “shebeen queen” has turned her tavern into a shelter for the homeless children.

Matshidiso Mothiba, 52, who used to run a successful tavern in Nellmapius extension 2, is now operating a home for destitute children from the same premises, reports Pretoria East Rekord.

According to Mothiba, she decided to close her business down in 2009, because she could not cater for children at her tavern.

And thus, the Give Them Hope Care Centre Foundation was born.

She said it all started when she was donating food parcels to needy families with the profit she was making from her tavern.

The idea to start a shelter came when she took care of three siblings whose mother was hospitalised.

“They were vulnerable,” she said.

At first, she erected a shack at Nellmapius greenhouse not far from her business premises, but due to the high demand, she could not accommodate everyone.

She then decided to run a shelter from her home.

Most of the children she looked after are from families affected by HIV/Aids.

She is taking care of more than 100 children at her Nellmapius home with donations and the help of six volunteers.

“I am taking care of children who are staying with me, those of daycare as well as after-care,” she said.

“The community of Nellmapius need[s] to learn to give and see the difference they can make in these children’s lives.”

She said every day was a struggle to feed a child, and pleaded with parents in the community to come and spend a day with her at her home just to show them love.

“The children don’t need much, all they want is to be loved,” Mothiba said.

She pleaded with community members to bring their children along when visiting the home.

“I do not regret the decision to look after the children and I believe it’s God’s calling.”

Mothiba said since she started her shelter, she has helped a lot of people to be successful in life.

Two of the children she took care of are now a paramedic and a sound engineer.

She pleaded with local businesses in their area to help with donations such as wardrobes, toys, clothes, food, and old computers.

The bliss of being a granddad
1 day ago
1 day ago
PREMIUM!

The bliss of being a granddad
1 day ago
1 day ago
PREMIUM!