The suspects are unknown and no arrests have been made. Silver Grey Toyota Corolla, the deceased car on the scene. Picture: Southern Courier.
Moffat View SAPS is investigating a case of murder after a 38-year-old male from Thokoza was shot and killed outside their offices on corner South Rand Road and View Street in South Crest this morning July 23, Southern Courier reports.

According to Captain Jeff Phora, Moffat View SAPS spokesperson, one black male was shot outside their offices while waiting to pick up their colleague.

According to the colleague, they heard gunshots while they were inside the offices, upon inspection they found that their colleague has been shot dead outside their offices. 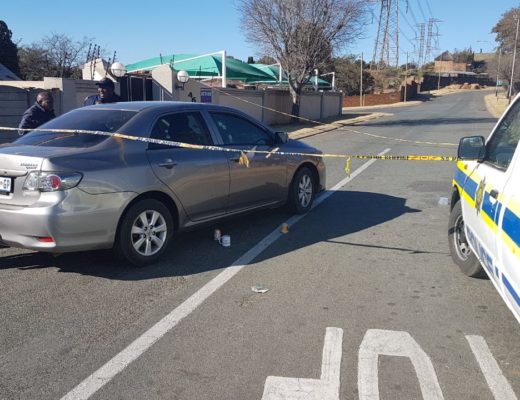 Four bullets holes on the side of the driver’s door, three on the window and one on the body of the car.

The motive for the killing is still unknown.

The suspects are unknown and no arrests have been made.