Post-strike clean-up operations to begin in earnest in Tshwane

The City will with immediate effect from August 3, activate the process of addressing the service backlog. 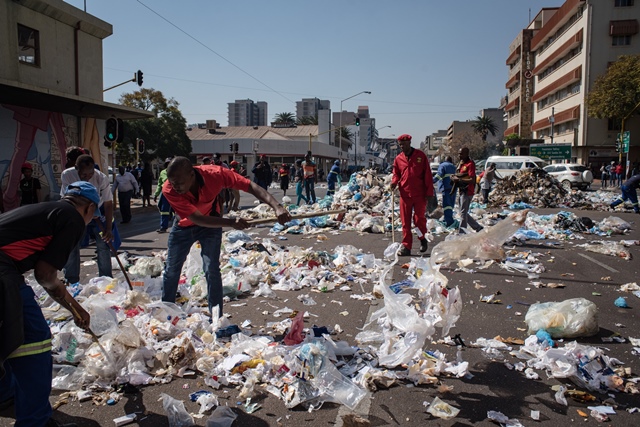 Samwu members are seen among trash dumped by a municipal truck in the Pretoria CBD during the third day of protests over wage increases, 31 July 2019, Pretoria. Picture: Jacques Nelles

Clean-up operations are expected to begin in earnest in the City of Tshwane, following a four-day-long wage strike.

Heaps of rubbish were left in some streets by striking members of the South African Municipal Workers Union (Samwu) and Independent Municipal Allied Union (Imatu).

The two unions were demanding an 18% wage increase from the City, backdated to 2017.

Workers claimed that the increase was given to group managers and executive directors in the City’s administration.

According to the agreement between workers and the City, parties agreed that the implementation of increases for section 56 group heads and divisional heads, which was used to allow increases for top management, be suspended until the completion of a benchmarking exercise.

The payments will be issued in different categories within seven days of the signage of the agreement.

The three categories are as follows:

Acting divisional head of strategic communication in the City, Lindela L Mashigo, said the downtime led to the temporary discontinuation of basic municipal services  such as water and sanitation, refuse removal, electricity and city-related modes of transport.

The City will with immediate effect from August 3, activate the process of addressing the service backlog.

“This actuation of basic services, is subsequent to the resolving of an almost a week-long wildcat protest which has now been terminated through a bargaining process which was finalised on Thursday.

“Starting from Saturday, there will be waste collection and disposal services throughout the metropolitan municipality. Customers are urged to place the bins outside their residential and businesses’ normal collection points,” said Mashigo.

He said this will only be applicable to areas where bins were not collected and transported to be discharged by the municipality.

In the absence of any obstructions, which are not anticipated, the normal known waste collection schedule will then go ahead as from next week.

“Following acts of vandalism, dumping and trashing of streets as well as open fires in the CBD, the City has embarked on a cleaning initiative that will restore the outlook of areas that fall within its jurisdiction.

“Our technicians have made substantial progress in restoring power outages across Tshwane and we remain dedicated to addressing the accumulating complaints from our customers in respect of water and electricity challenges.

“Residents are informed that our catch-up plan of restoring power focuses on ensuring that large areas get electricity supply thereafter we will attend to individual complaints. Consequently, our technicians are monitoring the pre-paid vending system which is reportedly experiencing challenges,” Mashigo said.

The City has promised that all Tshwane bus operations will only start operating on August 5.

“The Department of Roads and Transport would like to give assurance to all commuters that they will not lose any funds that have been loaded on their connector cards. The available balance points or credits will be the same as they were before the strike action.

“The City of Tshwane profusely apologises for the inconvenience and frustration suffered by all residents, business community, people visiting Tshwane and all other affected stakeholders,” Mashigo said