Snake experts in KwaZulu-Natal have their hands full as the elusive reptiles continue to nest and settle in Shallcross residents' homes. The green mamba, which was rescued by Nick Evans, in a Shallcross home.

KwaZulu-Natal snake catcher Nick Evans’ hunch that a snake found in a Shallcross home might be a green mamba proved to be true when he discovered the almost 1.4 metre-long reptile hiding under a drain plunger last week, reports Rising Sun Chatsworth.

A man contacted Evans stating that his wife spotted a massive green snake in their home.

“I get this description almost every day, and almost every time, the snake that is being described is the totally harmless spotted bush snake, often referred to as the garden snake. It’s Durban’s most common snake species and is thin, growing to around a metre in length, with a pale yellow belly and black spots going halfway down the body. This snake is nothing to be concerned about,” said Evans.

However, Evans explained that he knew this would be no ordinary snake when the caller’s wife said the snake was ‘as thick as her hand’.

“That’s when I realised that they lived close to the bordering of the North Park Nature Reserve and I knew that this could very well be a green mamba. As I discovered, it was!

“I found it hiding behind the washing machine. In its panic, desperate to get away from the humans, it tried hiding under the plunger. It looked rather amusing actually. It was a straightforward catch. It was only when I lifted her up did I notice she was pregnant,” he added. 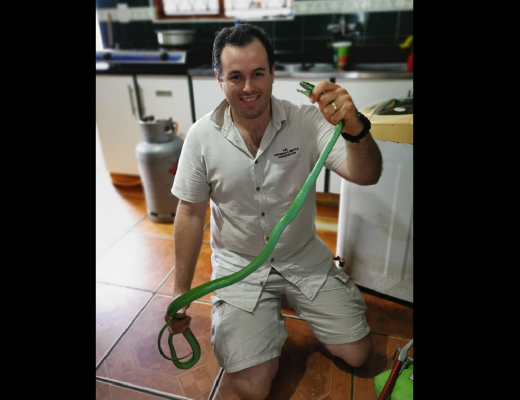 Nick Evans with the green mamba he rescued.

Evans will keep the snake until she lays her eggs.

“I will then feed her and release her. The eggs will take about two months to hatch, and once they’ve hatched, they too will be released,” he confirmed.

He added that while residents were feeling the extreme heat in KZN, so were the snakes.

“If you see a mamba or any snake, leave it alone. Don’t try killing it and don’t try catching it. Treat it with the respect it deserves. Try to remember, it is also scared, more scared than you are, and it wants you to leave it alone. Rather contact a snake catcher to deal with it,” he urged. 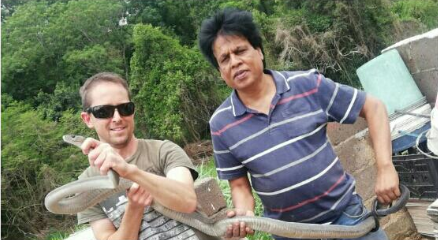 Snake catcher Jason Arnold and Shallcross resident, Mr Sookhooa, with the black mamba that was rescued.

He responded to a call-out from a frantic family in Shallcross and was at the house within 25 minutes of the call. According to the homeowner, Mr Sookhooa, Arnold was calm, quick, and caught the snake without hesitation.

He added that the snake had been sighted on the property on numerous occasions in the last two years, but Arnold was unable to capture it as it always escaped into the bush behind his yard.

“Arnold is a renowned snake catcher, who caught another black mamba that was also about three metres long in our residence in 2006. Well done to ‘The Snake Man’ and thank you for the awesome experience, informative talk and for allowing the residents and neighbours to touch and take pictures with the snake from a safe and supervised distance,” said Mr Sookhooa.