The living conditions are lending themselves to the outbreak of an epidemic of any contagious disease, ons of the refugees' leaders has warned. 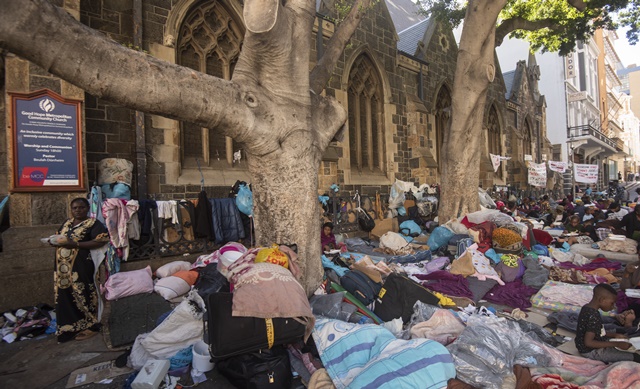 A general view of immigrants at the Central Methodist Church on Greenmarket Square after police were called in to stop infighting amongst refugees on December 30, 2019 in Cape Town. Picture: Gallo Images / Brenton Geach

There were no deaths due to chickenpox among refugees living at the Central Methodist Mission Church in Cape Town, but the health risks due to cramped living conditions are dire, one of the leaders said on Thursday.

“It’s not true,” said Papi Sukami, after it was reported that four people had died of the disease.

He added a recent news report had confused the drowning of four refugee children in Sea Point in December, and some cases of chickenpox at the church.

Sukami said there had been no fatalities as a result of the illness but warned the living conditions were lending themselves to the outbreak of an epidemic of any contagious disease.

“The situation is really an emergency,” he added, saying three Somali women also had sores in their mouths because there was not a proper place for people to wash their faces.

He had asked the health department to assist but when two officials arrived on Thursday, he claimed they were turned away by a group aligned to another leader, JP Balous.

Inside the church, a group aligned to Balous told News24 only he could decide who got help because he could tell who the refugees were, and who the chancers were.

“Unfortunately the officials could not access the church premises,” said Marika Champion, director of communications for the health department. She recommended that those in need of assistance visit the District Six CDC or Chapel Street clinic or Spencer Road clinic or call the Emergency Medical Services for help.

Balous was arrested on Wednesday and faces eight counts of assault, five of which are assault with intent to do grievous bodily harm, according to police spokesperson Brigadier Novela Potelwa. Three other people were arrested earlier in the week.

On Thursday, the luggage that had filled the entrance to the church was removed, and access was not controlled as strictly anymore after both leaders expressed concern over apparent militarisation at the church.

Sukami said a meeting was planned for Monday with the City of Cape Town. They have also received a call from a lawyer for the Department of Home Affairs and have heard from the SA Human Rights Commission again.

The refugees have been isolated from many aid organisations which tried to help after a leadership committee criticised their intentions.

They had hoped to be relocated to a country other than their country of origin, saying they faced danger in South Africa.

It was made clear by the UN High Commissioner for Refugees (UNHRC) that this was impossible. The plan was then to walk to Namibia to seek refuge there, but this has apparently been abandoned after being informed that Namibia will not take them.

“We are trying to find out now how we can have temporary accommodation, that is the most urgent,” said Sukami.

He added at the beginning of their sit-in, they were offered temporary accommodation by the UNHCR, but it was turned down by Balous.

Sukami also alleged Balous was part of a fundraiser that was not benefiting the refugees.

“He planned a business behind our suffering. That’s why I told him on Sunday he is suspended.”

Meanwhile, the perimeter of the church stank of urine on Thursday, with people leaning over filthy drains to brush their teeth and washing their naked children on the pavement.

Families sat in the low tents in the sweltering heat. A pile of clothes, shoes, and hairpieces lay near the main door of the church. Two women said clothes had been thrown out of the church during the leadership stand-off and alleged that some people also had personal possessions stolen during the confrontation.

Greenmarket Square’s traders have set up their stalls again, and an unoccupied police Nyala with riot shields lying inside was parked near the front of the church.

Inside the church, the cleaning that had marked the early days of the refugees’ residency had all but disappeared, with dirt and litter ground into the carpet.

On one of the pews, a group of children sat around a laptop watching a film, and somebody had rigged up a speaker for them to have better sound.

In a brief message, the Reverend Alan Storey announced there would be no church service this coming Sunday due to the situation.