They have refused to relocate to an RDP house in the area, saying the house is too small to accommodate them and their assets. 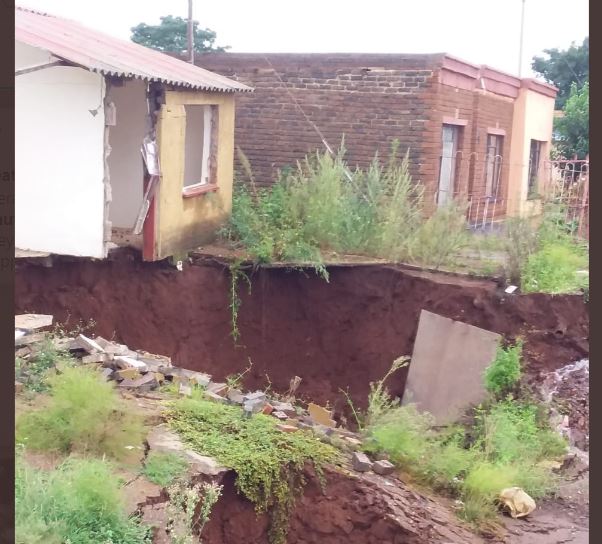 70% of Khutsong is not suitable for human habitation and over 25 000 families are expected to be relocated. Image: Twitter/@ReaMphahlele14

The name Khutsong means peace in Sesotho. However, for the Makgutle family, who live in Khutsong near Carletonville, the idea of peace is foreign.

The family of five live in a three-bedroom home. Just metres away from their gate is a massive sinkhole. It’s the same sinkhole which claimed their neighbour’s house.

The sinkhole, in the middle of the busy Nxumalo Road, is caused by decaying old infrastructure below the surface.

A wire fence has since been erected around the sinkhole to prevent motorists and pedestrians, especially primary and high school pupils, from falling into it.

One of the schools’ fence is just five metres away from the hole.

On 14 February, the Makgutle family members captured soil caving into the sinkhole on a cellphone video.

The event raised the family’s ire, causing them to head to the Merafong municipality to demand financial compensation.

Instead, the family was offered an RDP house in the area. They have refused to relocate, saying the house is too small to accommodate them and their assets.

Speaking to News24, family spokesperson Ingrid Makgutle says they have dug in their heels, despite being aware their home can be swallowed by the sinkhole at any point.

The family is also concerned that the fence around the hole can be stolen by criminals, affecting oblivious motorists and pedestrians.

Makgutle called on the municipality to replace its old infrastructure before the entire township disappears.

“We don’t have peace at all. We are always meeting with municipal officials to discuss this and they are not willing to attend to the problem.

“They are interested in relocating us to the new area and are not keen to replace the old pipes underground to prevent more houses from collapsing. They don’t want to own up to the problem, which they could have prevented if they had only regularly inspected their pipes underground,” Makgutle said.

She added that senior officials from Merafong first attempted to relocate them to a unit at an old block of flats in Carletonville.

“My mother is 78 years old and there is no way that she is going to stay in an old, dirty and hazardous flat. Not under my watch. I told them to either replace the old infrastructure underground or give us a house as big as the one we are living in to accommodate our furniture.

“It took us many years and money to extend our then four room house to what it is today. We don’t have money to extend another house. They must either give us a house similar to ours or financially compensate us.

“I have done research which I showed to the officials about how much an ordinary four-room house costs. I have asked them to evaluate our house and tell us how much it costs, and pay us accordingly before moving us,” she said.

Makgutle added that, if their house is swallowed by the sinkhole, they will have no option but to take drastic steps against the municipality.

Thembinkosi Nhlapo is facing similar challenges as the Makgutle family.

His parental house is currently being extended from an ordinary four-room house into a bigger one. However, outside his mother’s house is a massive sinkhole.

“This house is not yet completed, and we have been asked to vacate it. We are going to lose money spent to improve this property. Who is going to reimburse us?

“Our house is bigger than an RDP house and our furniture and other items are not going to fit inside those small RDP houses. They must give us a house as big as ours, so we can move everything we own inside, not a tiny RDP house,” Nhlapo said.

Member of the Mayoral Committee for Infrastructure Mogomotsi Sello said the dolomite situation in the township became apparent in December 2000.

Sello said 70% of Khutsong is not suitable for human habitation and over 25 000 families are expected to be relocated. 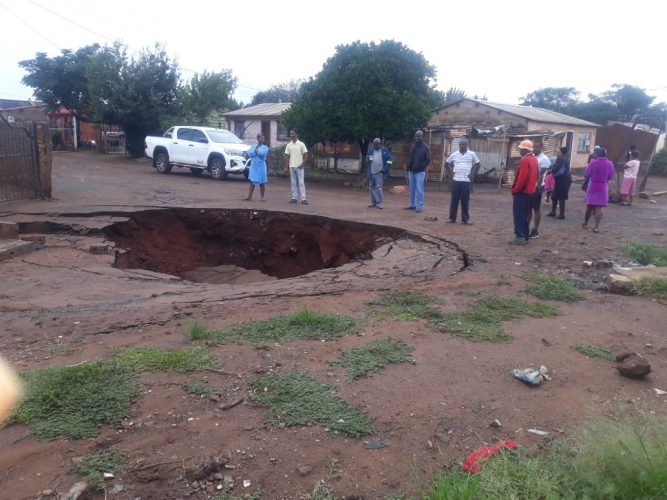 Flooding in Khutsong has exacerbated sinkholes in the area. Image: Twitter/@XhalaSelby

“Since 2016, the situation has drastically deteriorated. New sinkholes or dolines formed at several locations in old Khutsong, which severely damaged internal water supply pipes to Khutsong extensions and sewer pipe networks that drain via outfall sewers to the Khutsong Waste Water Treatment Plant. 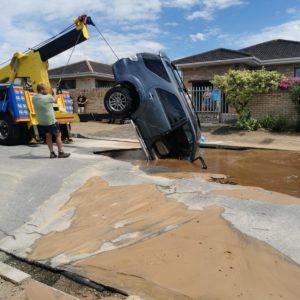 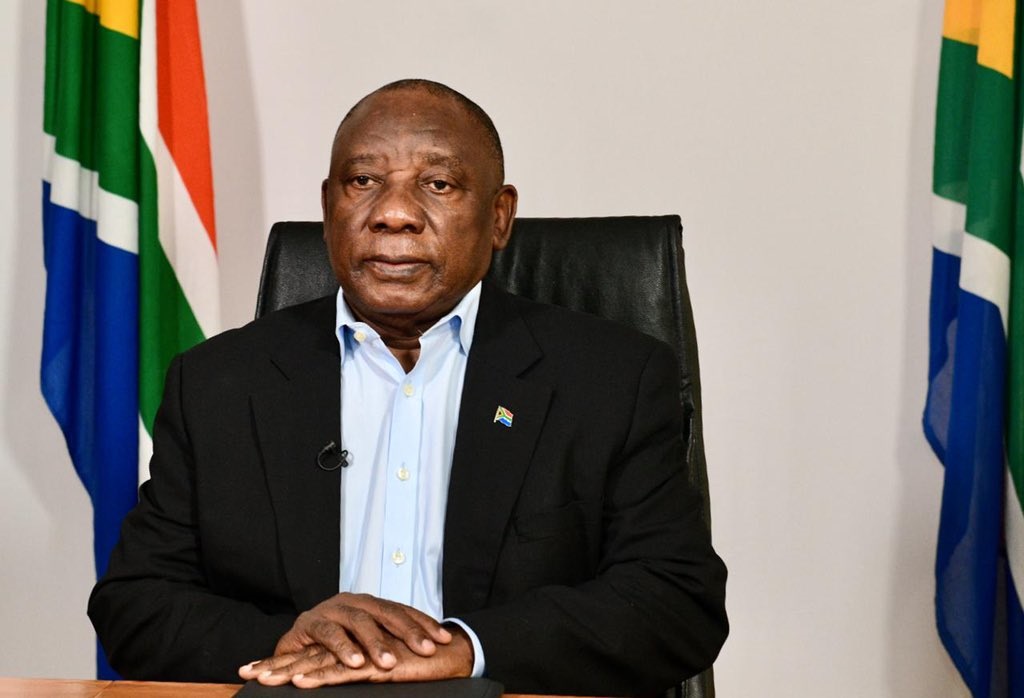 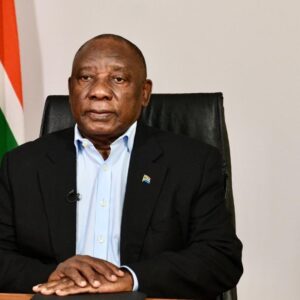 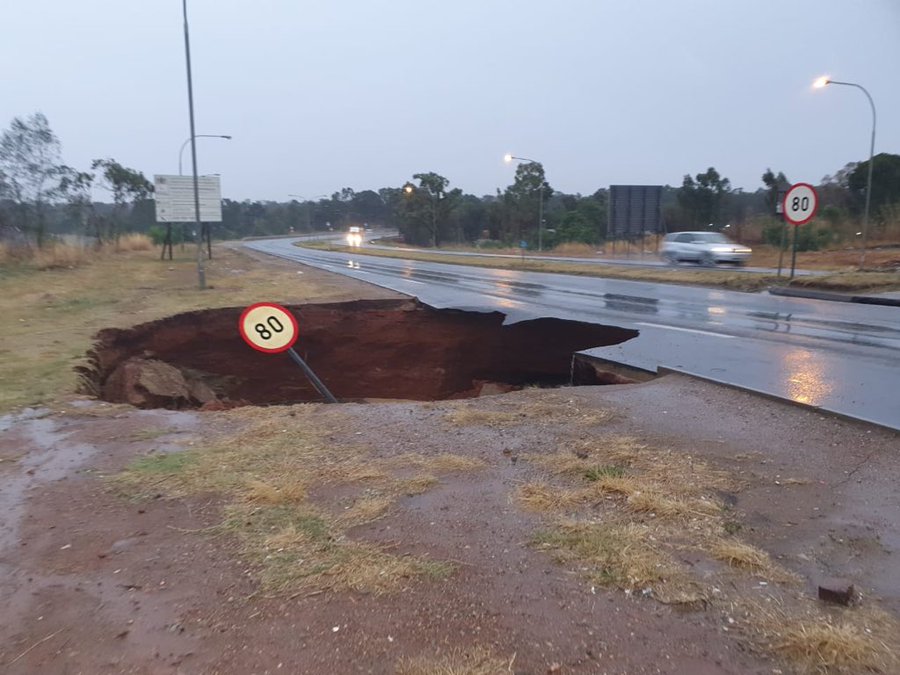 After big rain, motorists warned of huge sinkhole on N12 in Benoni
2 years ago
2 years ago

After big rain, motorists warned of huge sinkhole on N12 in Benoni
2 years ago
2 years ago