The plan is to deploy over 1,500 patrollers who would assist in policing and discouraging land invasions. 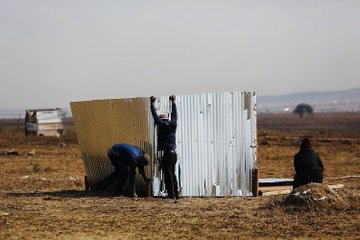 City of Johannesburg in Lenasia to roll-out their plan to fight the scourge of land grabs during pandemic.

Gauteng’s Cooperative Governance MEC Lebogang Maile has vowed that the Johannesburg metro will clamp down on illegal land occupation.

Speaking during the city’s anti-land invasion campaign in Lenasia today, Maile outlined the plan which aims to fight the mushrooming of informal settlements and invasions across the city.

The plan was to deploy over 1,500 patrollers who would assist in policing and discouraging land invasions after the city had noted a scourge of invasions amid the Covid-19 outbreak.

The Gauteng Province developed the campaign as a strategy to prevent land grabs imploding in the city. The metro will be intensifying the rollout of the Rapid Land Response Programme, where residents will be given serviced land to build their homes on.

“We need to discourage the illegal occupation of land. We will be integrating the communities in the fight against land invasions, says Johannesburg mayor Geoff Makhubo.

[Video????]: I am glad that we are working together with @GautengProvince to push back these land grabbing syndicates. We need to discourage illegal occupation of land. We will be integrating the communities in the fight against land invasions #NoToLandInvasions #WeServeJoburg pic.twitter.com/1NykNPFkm8