Tshwane metro insists it will not rehire dumped waste pickers

The city says it is of the view that the workers' contracts were lawfully terminated. 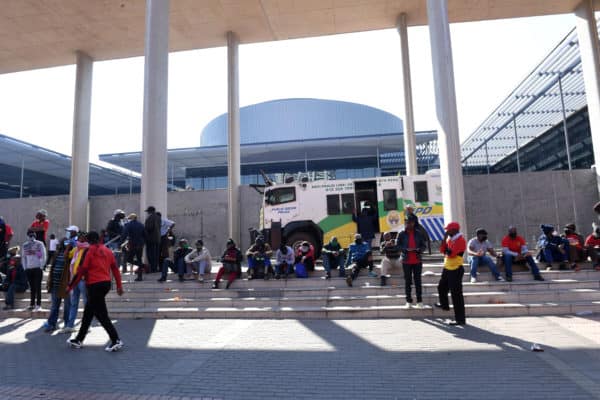 The City of Tshwane has reiterated that it will not rehire workers who were left unemployed following the expiration of their contracts.

This is after a group of former capacity workers, whose contracts with the metropolitan municipality expired in October last year, protested outside the city’s officers, Tshwane House, in Pretoria on Wednesday.

“The disgruntled former capacity employees staged a sit-in at Tshwane House since the beginning of this week, intimidating and preventing employees and visitors from entering and exiting the building.

“They have also circulated video clips in which they made veiled threats against certain employees of the city. Tension escalated this afternoon after they pelted police with stones who retaliated with rubber bullets,” the city said in a statement.

The 627 workers, who were part of waste-pickers programme on 12-month contracts between October 2019 to October 2020, have accused the city of unfair dismissal and demanded that they be permanently employed.

However, the city said it was of the view that the workers’ contracts were lawfully terminated.

“When their employment contract ended last year, the municipality sent them a termination letter on 5 November 2020, inviting them to visit their HR agent to complete a slew of documents, including the Unemployment Insurance Fund [UIF] form, which formalised their termination.

“The former employees, however, refused to heed the call to come forward to complete the forms, insisting instead to be permanently absorbed into the employ of the city.

“The contract entered into between the city and the former contract workers in 2019 explicitly stated that the contract was for the duration of 12 months.”

The city also insisted it had informed the workers that “it had no intention of absorbing them as there was neither a need nor a budget appropriated for their permanent employment”.

“The city has already successfully defended its position at arbitration and is now awaiting the final outcome of the dispute at the Labour Court in Johannesburg.

“The workers have also alleged that ‘some people’ at the city promised them permanent employment, but they couldn’t adduce any documentation to substantiate their claim,” the city added.