30 lions from a captive-bred farm had to be euthanised, after they endured days of suffering from being burnt. 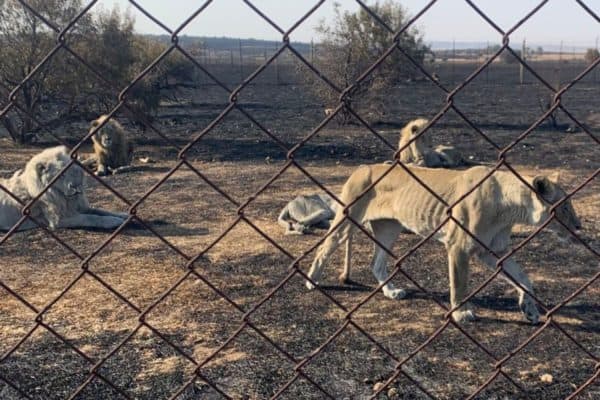 A senior Bloemfontein SPCA inspector said the lions were very weak, with ribs and bones poking out from underneath their matted fur. Picture: Facebook

WARNING: The following article contains images and details of a graphic nature. Viewer discretion is advised.

Recent wildfires in large parts of the Free State have destroyed tens of thousands of hectares of land, as well as countless species of wildlife, livestock and animals unable to escape the confines of farms.

One such unlucky group of animals were captive lions, who resided on a run-down farm in the Glen/Brandfort district.

The Bloemfontein SPCA worked for days just to gain entry to the property, but what they found they could not prepare for.

Meyer said the Bloemfontein SPCA crew were refused entry by the owner of the lion-breeding farm, and eventually obtained a warrant to enter the property.

The reason a pile of lion carcasses lay dead, together, was not because they were boxed in – there were no electric fences or poles caging them in. They were too weak to move, because they were so malnourished.

“We quickly realised that the owner didn’t care about the lions anymore,” Meyer said. “He was not willing to invest and financially spent nothing to ensure the welfare of these cats was up to standard.”

She said the lions were very weak, with ribs and bones poking out from underneath their matted fur.

The camps they were forced to live in were too small, and filled with faeces and old carcasses. Some lions turned to cannabilism due to starvation.

“This is one of the worst animal cruelty cases ever to happen in our careers.”

With the help of a veterinarian, the Bloemfontein SPCA euthanised 30 lions. Each carcass was carried to SPCA’s vehicles, and was cremated, to ensure their bones could not be harvested to fuel the illegal trade.

Their injuries were extensive.

Meyer said their paw pads were blistered, bloodied, oozing and burnt off. The lions’ faces were burnt, and their mouths blistered. They had severe smoke inhalation damage, so severe many of them were starting to drown in their own blood.

One lion’s eyes burst due to the heat of the fire.

“I cannot even try to imagine the pain. We cannot express the helpless and broken feelings we had during this time”.

Meyer and her team spent days at the farm helping the lions and tigers, making sure each one was attended to, fed, received water and euthanised if needed. They are still monitoring the progress of the surviving animals, which she described as “an ongoing battle”.

The team were so determined to help the animals they even entered the camps with the lions still inside.

Meyer said the state of the animals showed the owner of the lions and tigers found their bones more valuable than the quality of their lives.

She said they were “kept alive at all costs, despite their desperate condition”.

Meyer said the owner of the farm did not bother to show up during the inspection of the animals’ injuries, nor while they were being euthanised.

“He was laughing when he was issued a warning and we didn’t see him again.”

Although the farmer was not named by the SPCA, Beeld has since identified him as Charl Terblanche. His lion farm is called Olivia.

Olivia brands itself on Facebook as a “hunting and shooting range”, and is located 35km outside Bloemfontein.

After issuing the owner with multiple warnings for lack of food and shelter during their daily inspections, he also refused to comply and continues to spend no money on helping his own animals, Meyer added.

A case of animal cruelty has been opened against the owner of the lions and tigers.

Meyer also said the captive-bred lion industry had failed one of our proudest indigenous animals.

“This must stop. We should leave these animals to be free in the wild without any human contact, but we have failed that as a country.

In the meantime, the Bloemfontein SPCA made the decision to carry the costs of attending to the animals.

They are now pleading with the public for financial assistance.

If anyone is able to assist the Bloemfontein SPCA in getting these animals the help they need, please see their banking details below.

Account name: BFN Society for the Prevention of Cruelty to Animals

Or visit the Bloemfontein SPCA’s website and click on the donate button to do an easy payment. Use the reference ‘Lions’.