How a cat was saved by someone who lives more than 13,000km away came down to sheer determination. 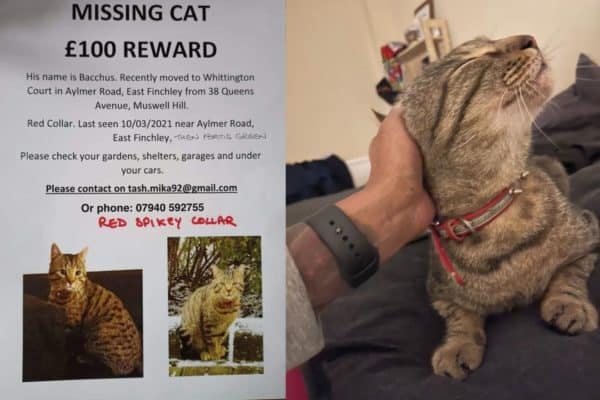 Bacchus is finally home, after he went missing in London in March. Photos: Supplied

A tale that could have ended in tragedy has resulted in a rare story of hope and happiness.

A cat that got lost in London was found thanks to a community effort spearheaded by its owner’s sister – who lives in Cape Town.

How a cat was saved by someone who lives more than 13,000km away came down to sheer determination and love for the furry four-legged friend who has since been reunited with his human.

Here is the story of four-year-old bengal cat Bacchus, his owner Vishay Naidoo and their saviour, Naidoo’s sister Tash-Mika.

Before being found, Bacchus was last seen in March this year, after Vishay moved house from Muswell Hill to East Finchley in London.

Tash-Mika said in a social media post her brother did everything he was advised to – he put Bacchus’s litter box outside, hung dirty clothes on the washing line, put used clothes in a box outside his old home, and set up a trap in the garden of one of the cats that used to bully Bacchus.

But this led to nothing.

Tash-Mika joined a Facebook group, Muswell Hill & Friends, and began posting pictures of Bacchus in all his unique glory religiously.

She befriended Good Samaritans who walked the streets of Muswell Hill and East Finchley looking for Bacchus, and even put up missing posters and distributed pamphlets.

This is because she was not even familiar with the area, having never been to East Finchley before.

After many false leads, including a dead fox someone thought was Bacchus, Tash-Mika remained optimistic, saying he was “extremely capable” outdoors.

Quelling rising feelings of hopelessness, she even enlisted the help of a virtual animal communicator to try and get Bacchus to come home.

The animal communicator, Claire Fitzgerald, said in her tracking of Bacchus she sensed he escaped his new home after hearing a foreign noise that scared him.

She told Tash-Mika that Bacchus was sleeping in a pile of boxes and was roaming an area with shops and pubs.

“He has smelt beer on the people. People have been walking past.”

Fitzgerald said it did not “feel” as though Bacchus was very far away, and that she asked him to try and make his way back home.

Two months later, in May, Tash-Mika and Vishay got their only two leads.

It was confirmed Bacchus was spotted at two homes two roads away from each other, “terrorising the neighbourhood cats and stealing his food”.

The next concern was that Bacchus was perhaps becoming too wild to catch, but a cat trap was set up anyway.

The ever-elusive Bacchus somehow managed to eat the foot in the cat trap without setting it off.

But on 30 September, the message Tash-Mika, Vishay and the cat-search team of East Finchley and Muswell Hill had been waiting for – Bacchus had been caught in the trap.

“My brother has never been happier, and my family is ever so grateful.”

Tash-Mika said in her social media post the help, kindness and support she and her family received was “unreal”.

“We pulled off a cat finding campaign, two continents apart! That is pretty amazing and I thought worth a share.