Cape vultures get a lifeline with satellite tracking programme

Vultures are nature’s cleaners. They break down carcasses and recycle nutrients, ridding whole areas of diseases. 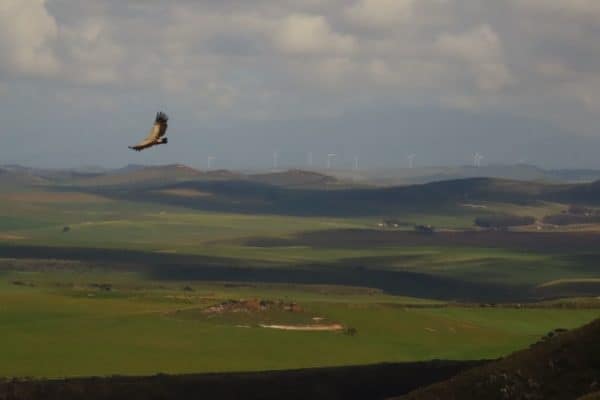 The programme, aimed at studying vulture foraging habits, is part of a long-term monitoring campaign, and was led VulPro, who had the arduous task of fitting the birds with satellite devices.

The programme is supported by CapeNature.

The colony of Cape vultures, whose fledglings are now fitted with the satellite devices, is the only one of this specific endangered species in the Western Cape.

These birds are tagged by abseiling down an 80m cliff to get to the nest. It must then be determined whether the fledglings are large enough to carry the devices, but not so big that approaching them will cause them to leave their nests, MEC for local government, environmental affairs and development planning in the province, Anton Bredell, explained.

Their survival relies on farmers not using toxic agrochemicals. The farmers also help supplement their diet by leaving sheep carcasses in fields, rather than burying them.

Vultures are nature’s cleaners. They break down carcasses and recycle nutrients, ridding whole areas of diseases. This is why their presence in ecosystems is so integral.

But they are large and not very adept fliers. This means their field of view is limited, and they have blind spots in the direction they are flying.

As such, Bredell said studies are being done into possible risks vultures face by colliding with wind turbines and power lines.

“VulPro will provide vital information about where the vultures go to feed and whether measures need to be taken to reduce the risk of collisions with wind energy infrastructure,” Bredell said.

“We take conservation and the environment very seriously in the Western Cape and despite severe budgetary challenges we try to do what we can to ensure future generations will get to enjoy our natural heritage one day.”