Tempers flare between EFF, DA after Malema’s speech in parliament

Floyd Shivambu denied he had sworn - using the f-word - at a DA MP, while presiding officer Madala Ntombela said he would probe the fracas. 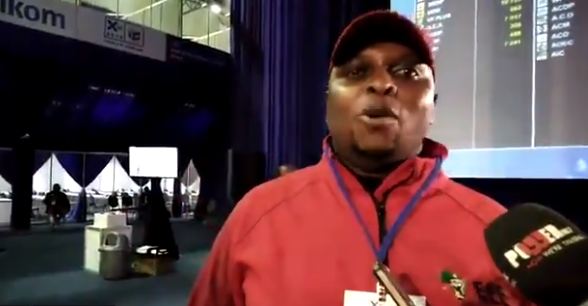 An assault-accused EFF MP had to be restrained by his colleagues as tempers flared between the EFF and DA in the National Assembly on Tuesday.

The incident occurred after EFF leader Julius Malema had introduced a debate about insourcing in the government.

Malema was walking back to his seat through the DA benches when he suddenly turned around and strode toward DA MP Ghaleb Cachalia and spoke to him, waving his hand in his face. It is unclear what was said between the two.

Meanwhile, Malema, who had since made his way back, and EFF MP Mbuyiseni Ndlozi had to restrain their assault-accused colleague Marshall Dlamini who grabbed hold of DA MP Denis Joseph’s arm in a heated exchange.

“Honourable House chair can you gain control of the House please?” DA chief whip John Steenhuisen exclaimed, while DA MP Darren Bergman got between his colleague and the EFF MPs.

“Honourable members, the behaviour is unacceptable, please,” Ntombela said, adding all MPs were responsible for the decorum of the House.

Steenhuisen asked if he would investigate the incident.

“What has just happened here is a gross violation of the rules of parliament,” Steenhuisen said, as Cachalia nodded his head.

“It is not acceptable for members to be threatened the way they have been threatened,” he added.

Ntombela said he would investigate the fracas.

Earlier during the sitting, after EFF chief whip Floyd Shivambu had passed through the DA benches to his seat, DA MP Cameron Mackenzie rose on a point of order, claiming Shivambu had sworn – using the f-word – at a DA MP.

Dlamini was seen on video slapping a police officer in civilian clothing earlier this years as MPs were leaving the National Assembly building on February 7 after President Cyril Ramaphosa had delivered his State of the Nation Address.

A charge of assault is currently being heard in a Cape Town court.

Last week, the National Prosecuting Authority confirmed it would prosecute Malema and Ndlozi on charges of assault after they allegedly assaulted a policeman during the funeral of struggle icon Winnie Madikizela-Mandela.

The incident was caught on CCTV and the officer subsequently opened a case against the two.