Mkhwebane says ‘no’ on donor funding for public protector, but yes for crowdfunding for herself

She said the crowdfunding campaign was prompted by a ruling which still, in her view, 'unfairly separated the public protector from Busisiwe Mkhwebane'. 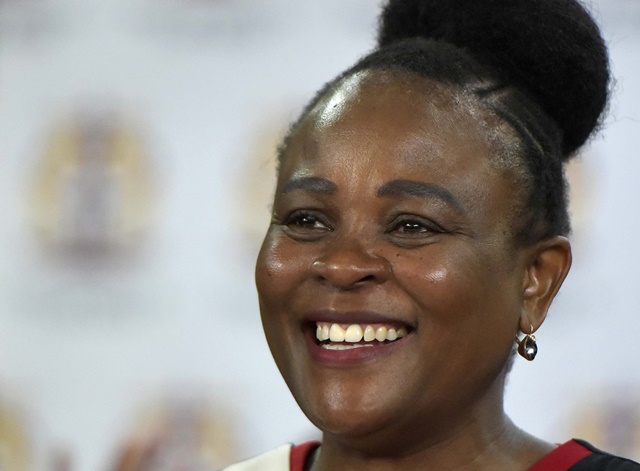 While Public Protector Busisiwe Mkhwebane has in the past dismissed the idea of using donor funding for her office in an effort to protect its independence, she doesn’t have an issue with using the money raised in a crowdfunding project to help her pay for personal costs orders granted against her.

Mkhwebane was addressing the Portfolio Committee on Justice and Correctional Services on Friday.

DA MP Werner Horn mentioned that in the past, she was very firm that the public protector should not accept donor funding, to protect the independence of the office.

He asked her thoughts, with this in mind, on the crowdfunding campaign for her.

“I must indicate that this process is a process that has been initiated by members of the public, who are feeling that there is a threat to this constitutional institution,” said Mkhwebane.

“And again, it is a matter of making sure that were are not threatened as an institution – especially the independence of the institution, and the instilling of fear in the person of the public protector.”

She said the crowdfunding campaign was prompted by a ruling which still, in her view, “unfairly separated the Public Protector from Busisiwe Mkhwebane”.

“Therefore, it’s a question of availing the money in my personal space, which will be declared, and we have a legal opinion on the matter. And again, I was doing my work as the public protector.”

“I’ve mentioned several times, the very same judges, they have a lot of judgments which are set aside by higher courts,” she responded.

She said that when they oppose the review applications against public protector findings, “it’s a matter of assisting the court to come to a decision which is balanced” and to ensure it doesn’t impact on the mandate of the public protector.

“But it’s [viewed that] by opposing, it is frivolous litigation on our side. That’s what is causing this perception that if you’re losing cases in court, it is that you are not performing your duties,” she said.

“And I must say, those reviews are not focusing on substantive matters, [they] are focusing on procedural issues, which most of the time we can explain ourselves, but again it depends whether our explanation is taken into consideration.”

Mkwhebane got a warm reception from the EFF and the ATM.

EFF MP Thilivhali Mulaudzi said she was “fit and proper” for the office.

EFF MPs Makoti Khawula and Godrich Gardee, who are not members of the committee, also attended the meeting. MPs can attend and participate at meetings of committees of which they are not members, but may not vote.

Gardee had a go at Deputy Public Protector Kevin Malunga.

“Like Pontius Pilate, he was washing his hands when the heat [was] on in the kitchen,” Gardee said of Malunga.

After a short break, Gardee complained that Malunga told him how useless he was during the break.

“Should we be intimidated not to ask questions?”

“The beauty of lies is, that they have very short legs,” Malunga added.

Committee chairperson Bulelani Magwanishe didn’t want to degenerate the meeting and asked to speak to Malunga and Gardee after the meeting.

The committee heard that despite reducing the office’s deficit, the institution will need additional funding of R110.9m over the medium term to fulfil its mandate.