The party had caused a suspension of proceedings after an hour. 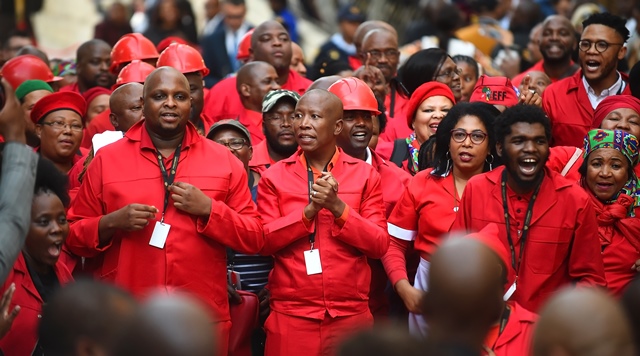 When parliament reconvened after a delay on Thursday of more than 10 minutes, the EFF declared that they did not wish to be addressed by President Cyril Ramaphosa as long as former president FW De Klerk and Minister Pravin Gordhan were present.

They then left the House on their own after the speaker asked them to leave.

When the last person in a red overall walked out, speaker Thandi Modise said: “Please close the door!”

After nearly an hour of disruptions, it had earlier been clear that the microphones had been switched off. Modise then suspended proceedings and said the bells would be rung for them to reconvene.

Many had expected the EFF to be removed from the House by security. They had chanted that Pravin Gordhan should “go” during the delay.

Earlier Modise told EFF MPs to take their seats or leave after Science and Technology Minister Naledi Pandor suggested that any MPs who continued to disrupt should leave the House.

The EFF had objected at length to an MP who had earlier suggested that MPs step outside to sort out their differences physically. Modise refused to take the MP to task, saying she was not sure which individual had spoken.

Leadership showed by ⁦@Julius_S_Malema⁩ and the entire ⁦@EFFSouthAfrica⁩ is amazing and they remain our last hope as the Africans #malema pic.twitter.com/sMUY34bkUu

EFF MP Mbuyiseni Ndlozi described the MP as a “My Perfect Wedding” cast member because of his dress sense.

EFF deputy leader Floyd Shivambu had earlier objected to Modise describing their behaviour as disruptive, saying that they had been operating within the rules.

“You are infringing on the rights of all the other members of this House,” Modise told the EFF.

After the EFF’s MPs were gone, a debate ensued in the House among the remaining MPs that disciplinary action should be taken against the EFF for their conduct.

Modise agreed that they would be referred to the powers and privileges committee. She also said they would consider suggestions that salaries of MPs be docked for poor behaviour.

Parliament is sitting for President Cyril Ramaphosa’s state of the nation address (Sona).

EFF leader Julius Malema had earlier supported the idea that parliament should adjourn so that party chief whips could consult and find a solution.

Modise told them they were disrupting the business of the day and would not allow it to continue any further and she would not take any further points of order.

EFF MP and newly appointed spokesperson of the party Vuyani Pambo had earlier risen on a point of order as Ramaphosa was about to start the state of the nation address (Sona) and said, “Mr President, can you please sit down.”

He argued that Ramaphosa should have fired Public Enterprises Minister Gordhan. The party has objected to the presence of Gordhan and blamed him for the poor state of the economy, particularly load shedding at Eskom.

Modise dismissed the point of order, saying the EFF was in the wrong and were interfering with the business of the day, being only the Sona. She argued the joint sitting of parliament was not the correct platform to address the issue of who was in his cabinet.

The EFF then said that if Modise wanted a peaceful Sona, she should adjourn the sitting of parliament so that Ramaphosa could fire Gordhan, and then they would not interrupt Sona any further.

Disruption, argument and insults followed for the next 20 minutes before Modise eventually said she would not take any more points of order.

However, several further points of order were raised.

#SONA2020 is disrupted. Ramaphosa hasn't had the chance to address the house.

On a point of order, he called De Klerk a murderer who had denied that apartheid was a crime against humanity. He also alleged De Klerk had presided over Vlakplaas, an apartheid-era farm where anti-apartheid activists were murdered.

“We ask that he leave this parliament because he has blood on his hands. He does not belong here.”

[MUST WATCH]: At the #EFFPresser last week, CIC @Julius_S_Malema warned Ramaphosa about the presence of De Klerk. #SONA2020 pic.twitter.com/EfHls3Dq4b

Modise said De Klerk had been invited as a former president and turned down his request.

EFF deputy leader Floyd Shivambu said it was wrong to recognise De Klerk as a former president since he had never been elected by a democratic majority.

Modise said that the rules still applied, regardless of the history. She denied leave for anyone to rise on any further points of order about De Klerk.

Malema said the ANC was “defending De Klerk in this house”.

The EFF had earlier defended its plans to disrupt the Sona, saying it formed part of the party’s oversight work.

Watch the sitting live below:

Modise this week assured the country there would be no disruptions allowed during the Sona address.

The only item on the agenda for the day was clearly outlined as the president’s address, she said, despite Malema’s threat to disrupt proceedings.

The EFF recently called for De Klerk to be stripped of his Nobel Peace Prize.

Secretary-general Marshall Dlamini on Thursday said the party would also not pull back from its plans to hold Ramaphosa accountable for appointing Public Enterprises Minister Pravin Gordhan to his Cabinet.

In the past, the EFF disrupted former president Jacob Zuma’s Sonas, calling for him to resign and pay back the money that went towards renovations of his homestead in Nkandla.

During the Zuma years, Malema capitalised on the chaos caused by disruptions in the chamber, which often left former speaker Baleka Mbete seemingly unable to control the House.

“When we enter that parliament, that is where we work. The issue of Gordhan is no small matter. The guy is presiding over state-owned enterprises.

“Today we can’t guarantee access to electricity, and we keep saying the issue of electricity is no longer a luxury, it’s a human rights issue. The guy is incompetent, the guy has lied to him [Ramaphosa] in front of the entire country and there are no consequences,” he said.

In December last year, Ramaphosa assured the nation that there would probably be no load shedding between December 17 and January 13. Shortly after the new year, before the mooted January date, Eskom announced a fresh round of load shedding.

This led to Deputy President David Mabuza making a statement that Ramaphosa was deceived into making the assurance.

Dlamini continued: “We are saying he must do his job. If you are scared of your ministers, we are not scared of you. That is exactly what we are going to do and we are doing it at the right place. We said to Ramaphosa that we are going to give him an opportunity, but we are realising that he is a coward and a clown. We must put the pressure on him.”

Earlier on Thursday, ANC chief whip Pemmy Majodina told News24 that disruptions to Sona were a form of anarchy which would be met with “high discipline”.

On Tuesday, the EFF claimed that parliament’s security officers had a plan to “smuggle” police into the precinct.

The claims were rubbished by Police Minister Bheki Cele, who said the police would be outside to ensure law and order. Parliament described the claims as serving only to distract.

EFF disrupted Ramaphosa and Zille's plan to give hung metros to ANC, says Malema
5 hours ago
5 hours ago

EFF disrupted Ramaphosa and Zille's plan to give hung metros to ANC, says Malema
5 hours ago
5 hours ago