'We want to state categorically that any leader of our country who owes loyalty to settlers and white state capturers, is defining himself as an enemy of the people,' the EFF leader said. 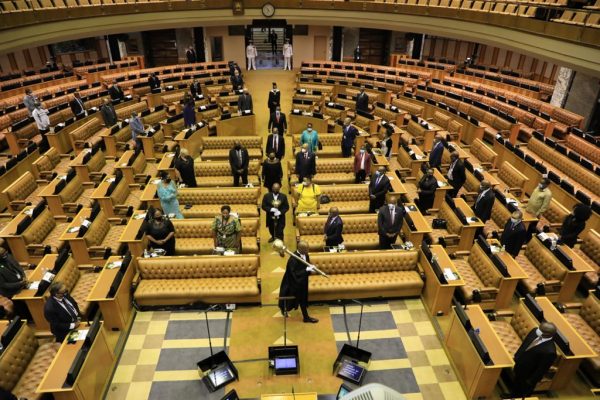 Chaos erupted in the joint sitting of Parliament on Tuesday during the debate on President Cyril Ramaphosa’s State Of the Nation Address (Sona).

Economic Freedom Fighters (EFF) leader seemed to have gone over his allocated response time, however, National Council of Provinces chairperson Amos Masondo was not aware that the EFF was to use its time on the programme only for Malema.

MPs started howling at each other, with the EFF demanding that Malema be allowed to use up his time.

Malema spent most of his time criticising Ramaphosa’s leadership style.

“The reality is that the conditions of our people are getting worse, and whilst corona[virus] has worsened them, it is still not to blame for your general incompetence,” he said.

“Despite the PR stunts and showmanship, you demonstrated during the State of Nation Address on the 11th of February 2021, there is honestly nothing to celebrate under your leadership.”

“We want to state categorically that any leader of our country who owes loyalty to settlers and white state capturers, is defining himself as an enemy of the people. We will isolate and ultimately defeat all puppets of the white capitalist establishment.”

Malema said it was evident that the Guptas “have been replaced by a very powerful white capitalist capture of the Ruperts, Oppenheimers, Steven Kosheff [sic], The Mennels, and all other white people who played a central role in buying the conference of the ruling party in 2017”.

He said that when Ramaphosa was elected as president in 2019, the unemployment rate in South Africa was 26.1% but had now increased to 30.1%, with well over 10 million people unemployed.

He said that Ramaphosa was using the Covid-19 pandemic to shield himself from his failures.

“Despite empty promises at investment summits, the economy under Mr Ramaphosa is shrinking, and South Africa was already in a recession for the three quarters before the outbreak of coronavirus.”

“We experienced recession well before the Covid-19 and this is made worse by the fact that government’s contribution to the GDP [gross domestic product] continues to decline, due to the patently foolish and unscientific reduction of the budget,” added Malema.

“When we were confronted with the Covid-19 pandemic, we could not even manufacture the most basic of things, like masks and sanitisers. South Africa has spent more than R30 billion purchasing PPEs, and this has benefitted foreign companies.”

Watch the debate below, courtesy of the SABC