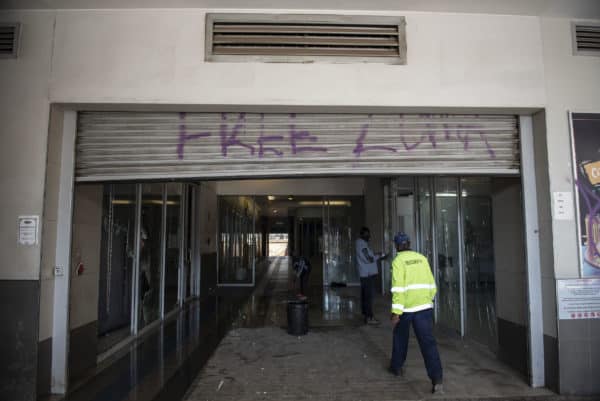 A security officer walks through an entrance at Ndofaya Mall in Meadowlands, Soweto, under a gate with the words "Free Zuma" spray-painted on, during a clean-up operation, 20 July 2021, after rampant looting. Picture: Michel Bega

Eleven of the 12 suspects who are believed to be the instigators of the violent unrest in parts of KwaZulu-Natal and Gauteng that the country witnessed two weeks ago are in police custody.

The violence, which has been widely seen as an expression of anger and frustration by people living in poverty, was also worsened by the impact of Covid-19, and has since left more than 300 people dead to date.

It was ostensibly sparked by the imprisonment of former president Jacob Zuma.

The looting of more than 1.5 million rounds of ammunition saw the government describing the unrest as “a failed insurrection“.

Government previously indicated that 12 people were behind the “well-orchestrated economic sabotage” .

“The only thing that I can say is that, to date, the reports that have been brought to me, 11 instigators have been arrested. And they are behind bars,” Sitole said.

Sitole, however, refrained from saying that the instigators behind the unrest were “12 people”.

“I don’t want to say there are 12 people. We have asked in the National Security Council as well, where we are reporting, that we rather be allowed to deal with this matter operationally. Because, from time to time, we are asked to relate on progress on arrests.

“Although it’s no longer a problem to report people that have already been arrested, but sometimes if you are dealing with an unconventional approach, it is far more risky to tell people that you have arrested someone, because of the other unconventional modus operandi risk[s] that are there.”

Meanwhile, General Godfrey Lebeya, head of the Hawks, revealed that law-enforcement agencies were making progress in their investigations.

“Regarding the 12 people that have been mentioned, the national commissioner has indicated that there are other people already arrested. What I can assure the committee is that there is a whole process is taking place behind closed doors between the investigating team that is working closely with the National Prosecuting Authority [NPA].

Lebeya told the committee that more charges could be added for the instigators who have been arrested.

“The investigation is continuing. As the national commissioner has indicated, certain individuals have already been taken into custody.”

Frolick said following oversight visits in KwaZulu-Natal and Gauteng, it was clear that Parliament required more information on the unrest, which would see an inquiry set up to investigate the matter.

While the ANC MP questioned whether the State Security Agency (SSA) had an intelligence report on the riots prior to the incidences occurring, he said Parliament was looking to begin with the investigation as soon as possible.