Mngxitama says his comments are a response to Rupert's utterances that he is closely linked to the taxi association and so has his own army. 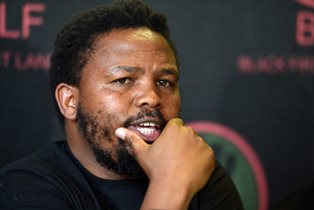 Black First Land First (BLF) leader Andile Mngxitama briefs media at BLF Head Office in Johannesburg, 11 November 2018, on why BLF calls for 5 Whites for every 1 Black life and an announcement of steps to be taken to ensure self defence. Picture:Nigel Sibanda

Black First Land First (BLF) leader Andile Mngxitama held a media briefing on Tuesday to clarify the “massive confusion” around the utterances he had made at a rally where he called for five white people to be killed for every black person, and that white people should be killed along with their pets and children.

Mngxiatama’s comments raised renewed calls for him to be prosecuted for hate speech.

The Democratic Alliance (DA) and the Congress of the People (Cope) on Monday announced their intentions to lay charges of hate speech and incitement to violence against Mngxitama, while the South African Human Rights Commission (SAHRC) is representing a complainant who has dragged the group to the Equality Court.

Minority rights group AfriForum has reportedly indicated that it, too, intends to also file court papers against the BLF.

At the briefing, Mngxitama said of his comments at the weekend: “This is the thing that has made white people to jump up and down [and] a lot of English-speaking black people who listen to particular radio stations to have sleepless nights.”

Mngxitama said “reactionary, pro-white political parties” had denounced the BLF for his utterances, with many “lodging a Moriah of complaints”.

“Every five minutes I get a message [saying] it is the DA now, no, it’s not the DA, its AfriForum, it is Solidarity, it is another deranged white person. Even Cope has been revived from the dead,” Mngxitama said.

The BLF leader said his comments had been blatantly distorted, adding that the BLF was a peaceful movement which was “peaceful with those who are peaceful with us”.

Mngxitama said the reactions to his comments were from people “who are committed to killing black people”.

“They insist on their right to murder us. They can’t believe there are black people ready to defend themselves. There is no law on Earth which says one can’t defend themselves,” Mngxitama said.

Right-wing formations and political parties, including AfriForum, the DA and Freedom Front Plus, were to blame for the “blatant distortion” of his comments at the weekend, Mngxitama said.

“They have erased Johann Rupert completely from the context,” the BLF leader said.

Mngxitama said the original video clip in which he could be heard making the controversial comments had “been edited by these groups”.

He said the video had been edited to decontextualise his comments, which were a result of something the chair of Richemont, Rupert, had said in a conversation with Given Mkhari, the founder and chairperson of Power FM, during an event hosted by the radio station last week.

A clip from the event, the Chairman’s Conversation, was played for journalists during the BLF briefing, in which Rupert tells Mkhari that he is closely associated with one chairman of a taxi association.

“So I also have my own army. Those red guys, they’ve got to go and remember the taxi association,” Rupert says in the clip.

Mngxitama questioned what Rupert meant when he said he had an army.

“Only a fool would not know that Rupert is saying anyone who affects his interests negatively will be subjected to taxi owners’ violence. He is telling us that he will unleash black-on-black violence. He is saying [he has hitmen],” Mngxitama claimed.

Rupert’s comments were concerning, he said, considering the prevalence of taxi violence in the country, adding that questions needed to be asked about whether the multibillionaire had not sponsored violence within the taxi industry.

Mngxitama said the BLF would not commit the same mistakes as the African National Congress, which had warred with the Inkatha Freedom Party during the dying years of apartheid in black-on-black violence funded by white people.

“We are saying Johann Rupert, this time around, no. That is all we are saying. This time around we will not fight black people you send; we have no beef with the taxi industry,” Mngxitama said.

He reiterated his comments at the weekend, saying that if one black person was killed, five white people would be killed.

“Is that incitement to violence or is it a call to stop violence?” Mngxitama questioned.

He questioned why Rupert had not been called to account for his comments, which were allegedly a threat against black people, while the BLF would now be forced to explain itself.

The BLF was of the view that it had a solid case to defend its leader’s comments.