BLF will take up arms if deregistered by IEC – Mngxitama

The BLF leader says he does not believe the IEC has grounds to deregister the movement, preventing it from contesting elections in 2019. 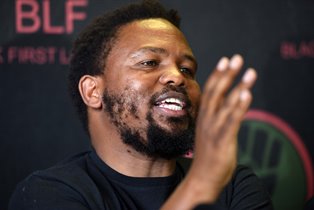 Black First Land First (BLF) leader Andile Mngxitama told journalists today during the party’s media briefing that should the Independent Electoral Commission (IEC) deregister the organisation, preventing it from contesting elections next year, the movement would take up arms.

Mngxitama made the comments after the IEC said it would wait for the BLF’s clarification on Mngxitama’s comments at the weekend before taking action.

During a rally on Saturday, Mngxitama called for the killing of five white people, including their pets, for every murder of a black person.

The BLF leader has since clarified his comments, saying they were in response to those made by the chair of Richemont, Johann Rupert, who said during a Power FM event last week that he had his own army in the form of the taxi association, which the “red guys” would have to be mindful of.

The IEC said: “We note the serious allegations against the BLF’s leader. The Commission will offer the party an opportunity to clarify its statements in the light of the values of the Constitution. We will assess the matter for an appropriate course of action after receiving a response.”

Mngxitama told journalists this week during the party’s media briefing that. should the IEC deregister the organisation, preventing it from contesting elections next year, the “movement” would take up arms.

Mngxitama said the BLF would be “very happy” to provide clarity on his utterances at the weekend and that the party was willing to meet with the commission.

“The only reason there is so much uproar is because white people do not want to see BLF in parliament next year. White people don’t want for the first time to have a black party in parliament,” the BLF leader said, adding that this sector of South Africa’s society had exerted pressure on the IEC, hence its statement.

“But we also want to ask them [the IEC] this question: did they ask Freedom Front Plus to explain itself when in parliament it said if land expropriation without compensation becomes law, it [FF+] would start a civil war?”

With regards to funding for next year’s elections, Mngxitama said the BLF neither had money nor did it have benefactors such as Adriano Mazzotti, who had paid the EFF’s registration fee in 2014.

“We are broke. We represent the broke and the poor. We don’t have your Johann Rupert. Your Guptas, before I even spoke to them, you chased them out,” Mngxitama said.

However, he said the party had relied on crowdfunding to amass the deposit required by the IEC for it to contest elections next year and that, through pledges and money in their bank account, the BLF had raised R200,000 of the R600,000 required by the IEC.

Mngxitama said the R200,000 would at least qualify the BLF to contest the elections at national level.

He said the movement would not take money from white people, white monopoly capital and from black people who might have certain “conditions attached”.