The ANC insisted on a motion of no confidence to remove the Tshwane mayor from a post he's leaving in 11 days anyway. 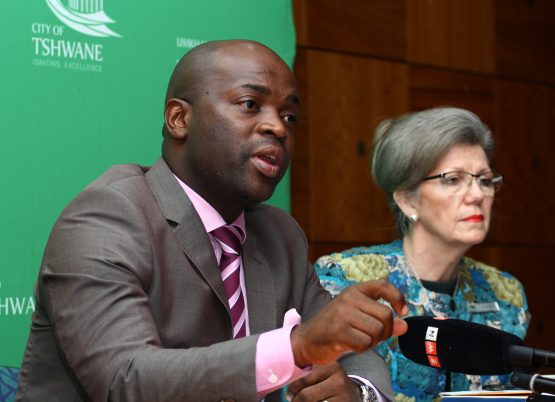 Drama seems to be the order of the day at a council sitting where the ANC tabled a motion of no confidence in a bid to oust the DA’s Tshwane mayor Solly Msimanga.

This despite the fact that Msimanga has already announced his resignation. He will be leaving his post on February 11.

This is clearly too long for the ANC to wait. They tabled a motion of no confidence in the mayor at a meeting of council that soon descended into chaos, according to tweets from eNCA’s Aldrin Sampear.

The most dramatic moment came after a comment from Msimanga, who said that a councillor’s inability to understand what he was saying was due to “Bantu education”, the inferior educational system imposed on black people under apartheid.

READ MORE: Msimanga resigns as mayor but Tshwane ANC wants him out now

This prompted ANC councillors to pelt the mayor with water bottles in a bid to get him to withdraw the statement, which he initially refused to do.

He eventually did withdraw it, but only after justifying it, saying that “the quality of Bantu education” is the reason “we are where we are”.

The ANC and EFF appear to have teamed up to remove Msimanga’s resignation from the council meeting’s agenda.

The ongoing council meeting will also hear a motion to suspend City Manager Dr Moeketsi Mosola over his involvement in a GladAfrica tender which was awarded irregularly.

#TshwaneCouncil Msimanga: the quality of (Bantu) education was bad that's why we are where we are. But anyway I will withdraw that. @eNCA

The outgoing mayor, who said he would be stepping down to concentrate on his bid to become Gauteng premier, made his resignation official with a letter this morning.

Despite this, the ANC forged on with their request for a vote of no confidence, demanding that it be put to a vote today alongside council business such as the notice of intention to suspend Mosola and a discussion on the AG report into the City of Tshwane.

#TshwaneCouncil While the @TshwaneANC wanted to table another motion of no confidence against mayor @SollyMsimanga, the mayor submitted his formal resignation letter to the speaker. @TheCitizen_News