De Lille highlighted an end to corruption, accountability by the president, and a relook at e-tolls as among her party's priorities. 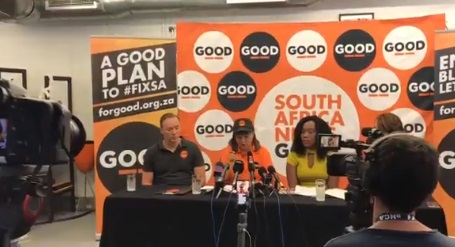 Good’s key focus areas are spatial, economic, social, and environmental justice. The eight-week-old party with around 67,000 members plans to roll out their election campaign and announce their premier candidates for the upcoming elections in the coming weeks.

“People needed to be employed,” said De Lille, who added she was prepared to turn government on its head for change. One of the party’s focuses was to tackle racism.

“Our country needs leaders with courage to tackle structural racism in our society.”

Addressing her party members through the party’s Facebook live stream, she said gender and race could not determine anyone’s opportunities.

She mentioned that Good would provide measures to ensure no one will be left out of opportunities due to the lack of data.

Although the party was launched months before the general elections, De Lille is convinced the party will disrupt the current status quo.

De Lille said land had to be used for public good and distribution of public owned land needed to be for the purpose of building homes.

The party wants to bring formal housing to townships. They also intend to give each family living in state-owned properties a plot plus a title deed.

The party’s position is that they acknowledge that land reform has been a failure, as many people died without “seeing land justice”. This, according to the party, meant the Constitution did not need to be amended, as it provided all the framework needed for expropriation.

E-tolls are a money-making racket, according to De Lille. She said it was more needed to better infrastructure in underdeveloped areas than to focus attention on “highways and bi-ways”.

“Good people will fight for economic justice. The role of government is to create conducive conditions for investment.”

She hoped the president would table progressive ideas at this year’s state of the nation address. The president needed to explain what would happen to those implicated in inquiry commissions and De Lille suggested he exclude all those implicated from any appointment list until investigations are concluded.

The party will fight for a non-racial society as well as environmental justice to find cheaper alternatives for renewable energy. This will be done to reduce carbon emissions, De Lille said.